Pilatus more or less hit the jackpot with the PC-12 turboprop utility aircraft. There was no aircraft yet with a single turboprop engine in the nose, short/rough field performance, a good range and a comfortable, flexible cabin with a large cargo door in the left aft fuselage. With its T-tail the PC-12 was easy to recognise, as there was no similarly looking aircraft. Indeed it was until Textron Aviation decided to take on comptetion with the Beechcraft Denali.

Note: different versions of the PC-12 are used by the USAF, all designated as U-28A. 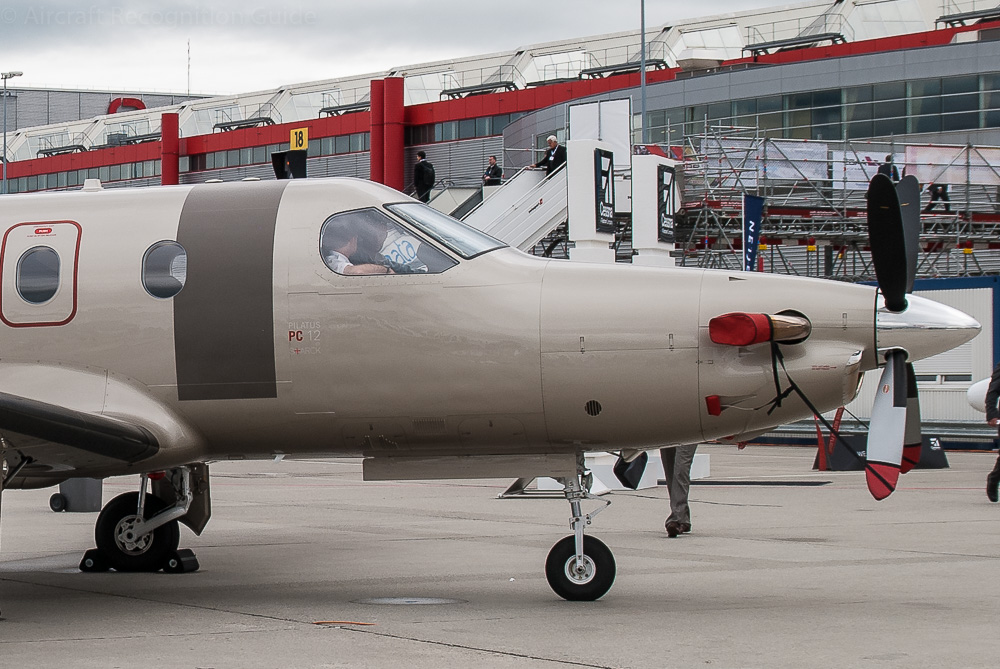 PC-12 nose, with the air intake palaced as a "smile" below the prop spinner. 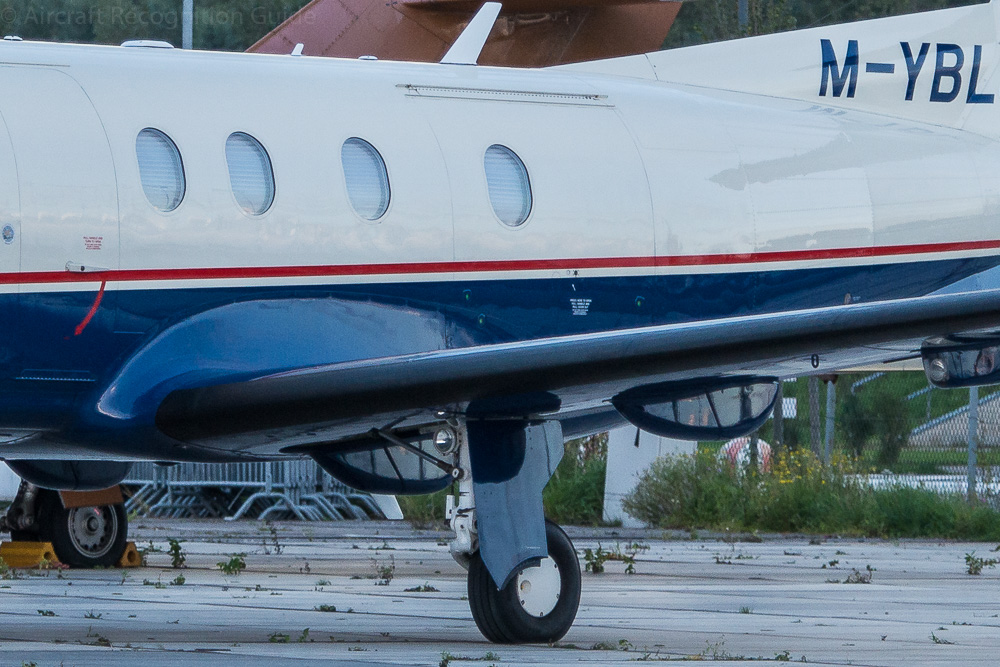 PC-12 cargo door behind the wing, with the last cabin window in it. 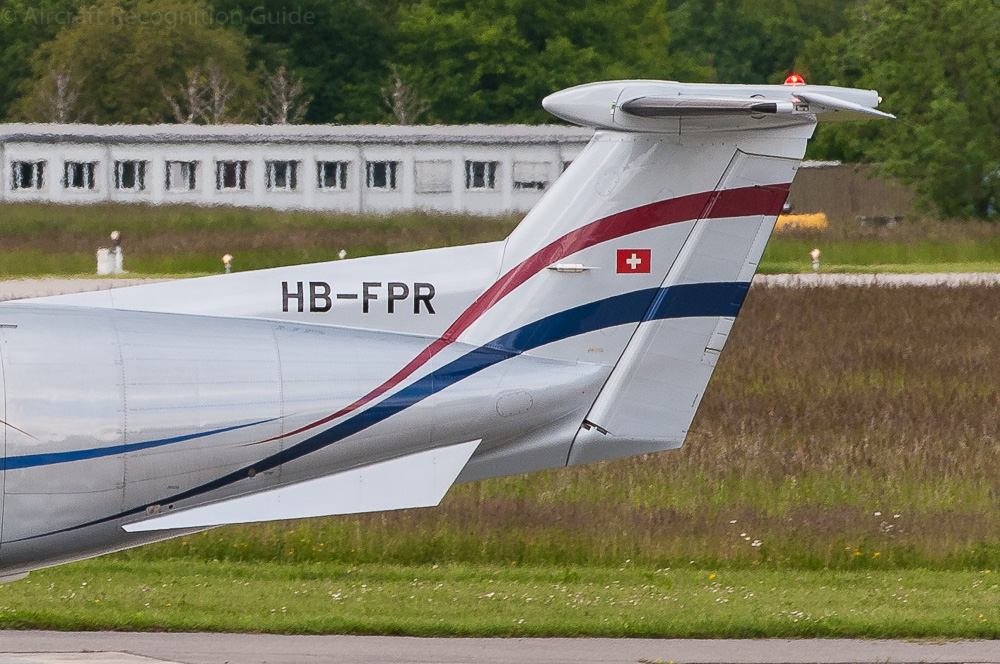 The first generation PC-12 is characterised by the shape of the winglets. Although the prototypes lacked them, the production version has either small winglets, perpendicular to the wings, of larger winglets at an angle of about 45 degrees. Both types of winglets were standard, the choice was up to the buyer. The PC-12 and PC-12/45 only differ in the maximum take-off weight, 4100 kg or 4500 kg.

Blackhawk Aerospace offers the XP67P engine upgrade for these models. With the upgrade the company replaces the original PT6A-67B by the PT6A-67P, that is standard on the PC-12/47E. On the outside we see no differences, it is just like the nose of all PC-12s. 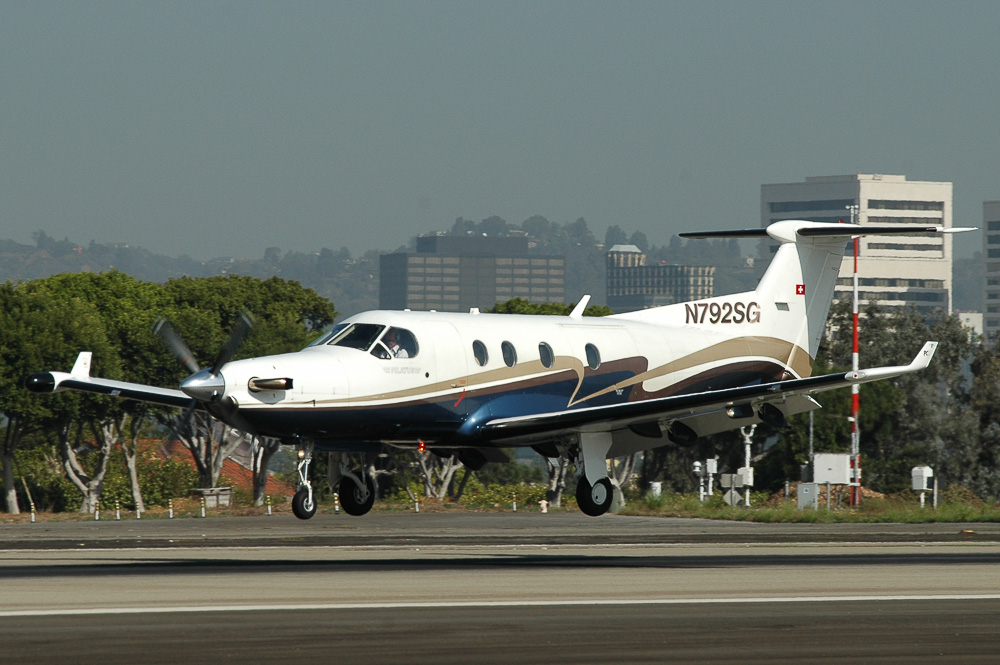 A PC-12/45 with the original, small winglets, mounted perpendicular to the wing tips. 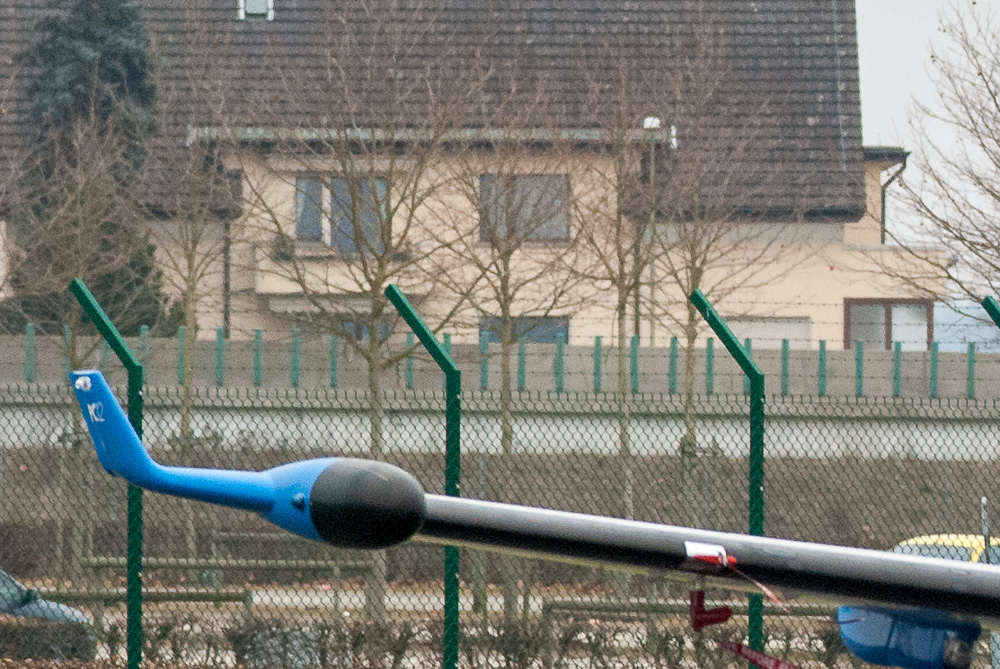 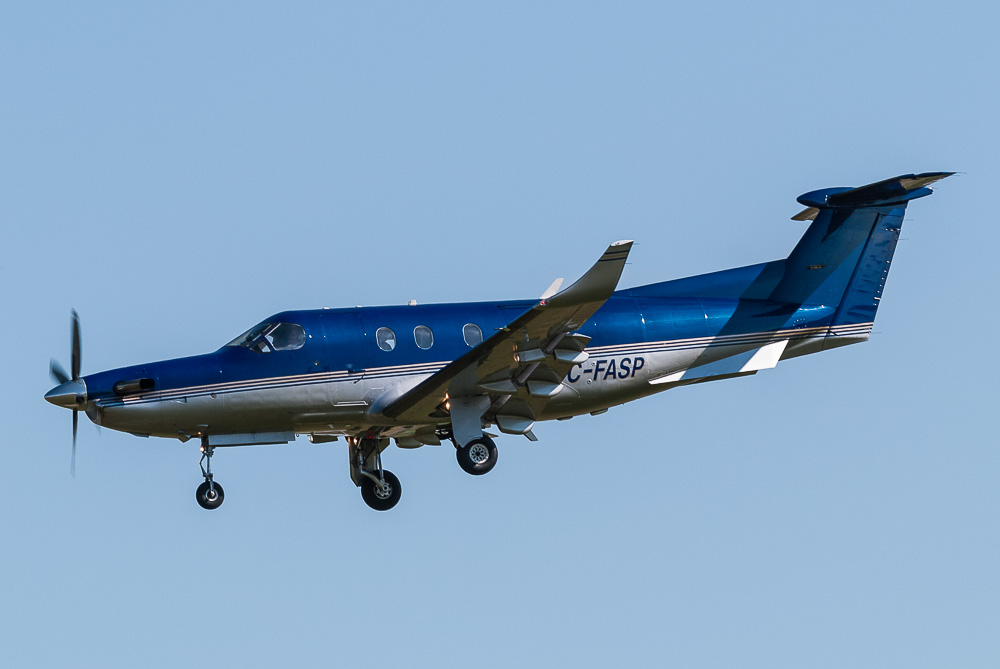 Another, but now with larger winglets, attached at about 45 degrees compared to the wing tips. 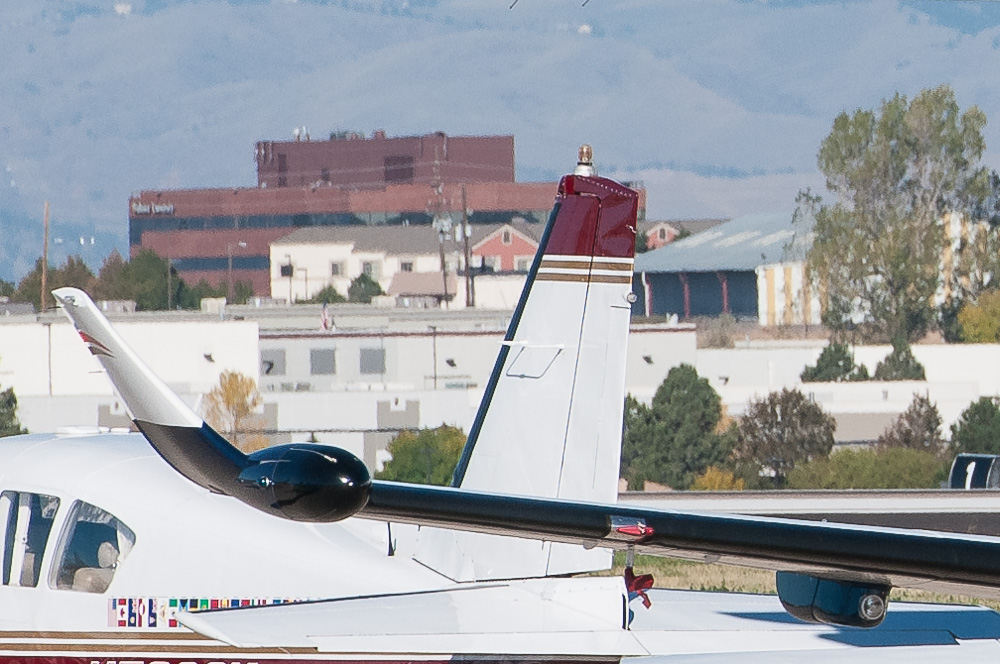 The easiest way to distinguish a PC-12/47 from the /45 is to look at the winglets. They look more like raked wingtips than winglets, because they are attached almost in-line with the wings.

The Blackhawk XP67P engine upgrade described above is also available for the PC-12/47.

On the updated version, the designated PC-12/47E, but marketed as PC-12NG, the winglets are no recognition point, because the changes compared to the PC-12/47 are internal: new avionics and a slightly different engine. This version can be fitted with a five-bladed prop. 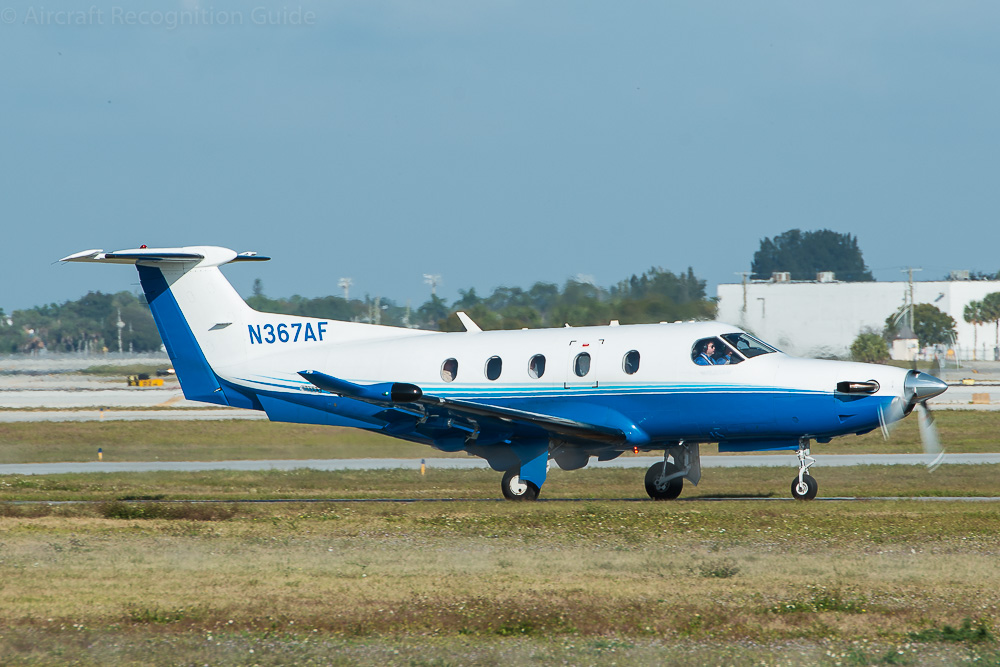 The PC-12/47E is originally the designation for the PC-12NG. It has the shallow winglet, but still the race track cabin windows. 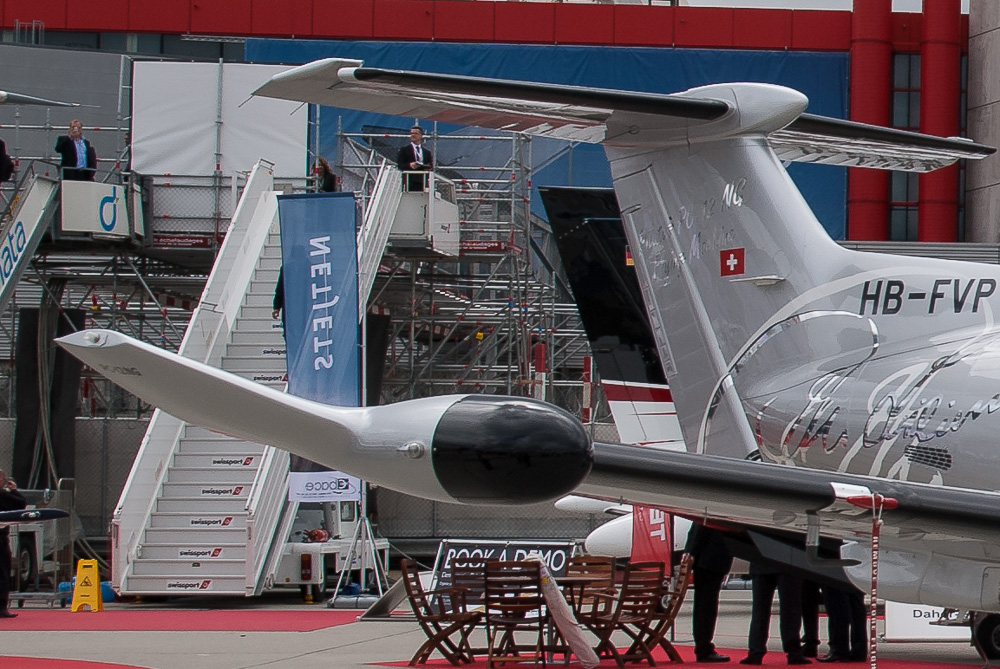 Detail of the third generation winglet for the PC-12, used on the PC-12/47 and later. It is mounted at a narrow angle with respect to the wings.

To recognise the newest version, marketed as PC-12NGX, you have to look at the cabin windows. These are rectangular, and like those of the PC-24. For the rest this subtype is the same as the PC-12NG, even the official designation PC-12/47E. PC-12NGXs are often painted with a black frame around the cockpit windows, but this can off course als be done on older models to make them look modern. 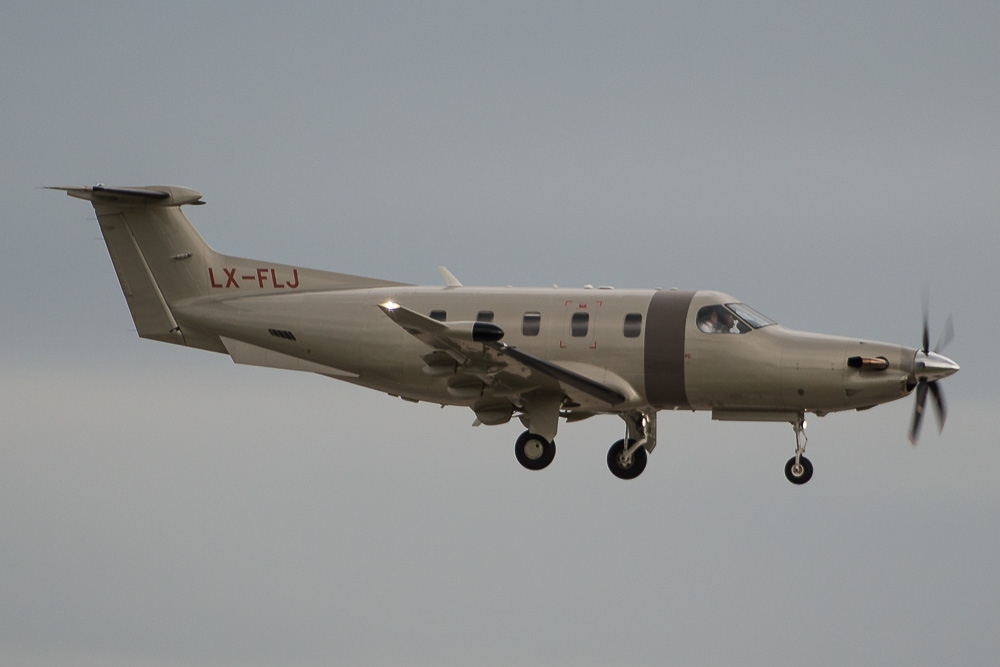 At first the PC-12NGX looks similar to previous versions, but when you look more closely you will see that it has rectangular cabin windows. 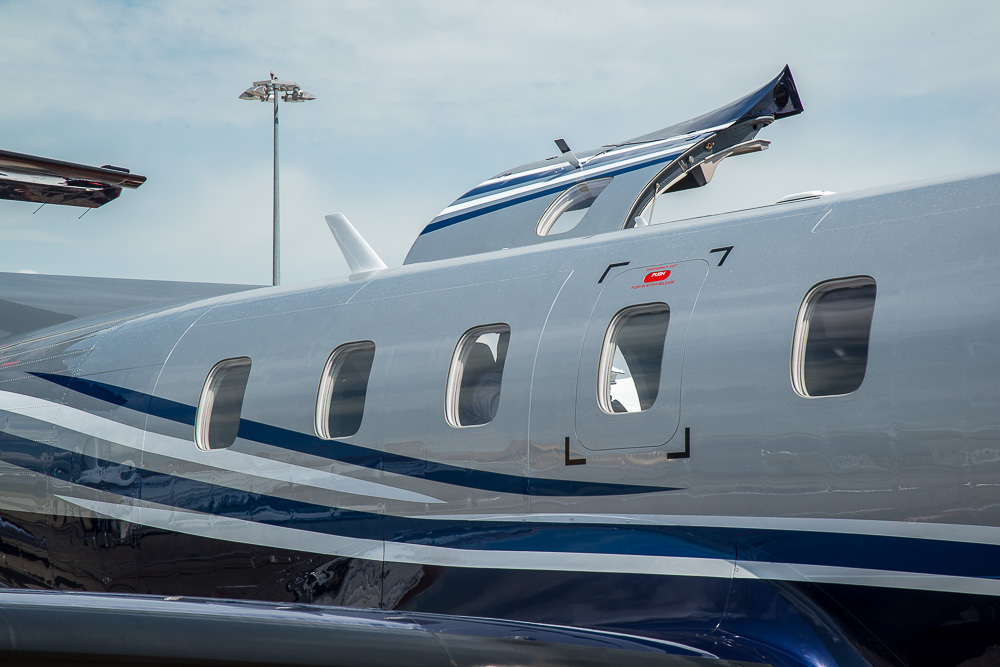 Here you can clearly see the rectangular cabin windows, typical for the PC-12NGX.

Another company that offers an upgraded stock PC-12 is known als Super Legacy XP Ltd. At the core of the modification is the same engine as Blackhawk uses. However this is mated to a seven blade propeller and has a redesigned cowling. On the PC-12 Super Legacy XP - as the modification is named - there is some space between the intake and the prop spinner. This also results in a smaller "smile" shape of the intake, when viewed from the front. 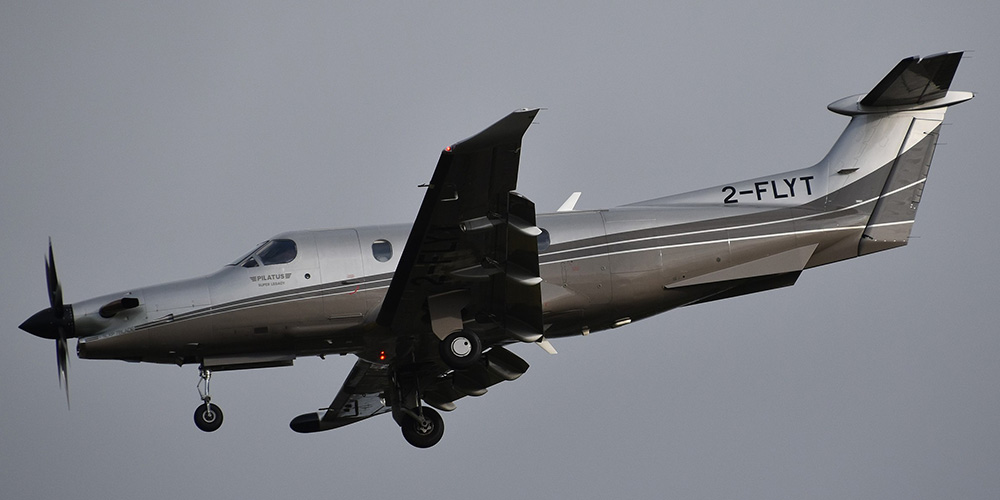 The Super Legacy XP upgrade gives the PC-12 a different nose shape than on the stock aircraft, although this is not very visible from this angle, nor is the seven blade prop. (photo: Alec Wilson/WikiMedia) 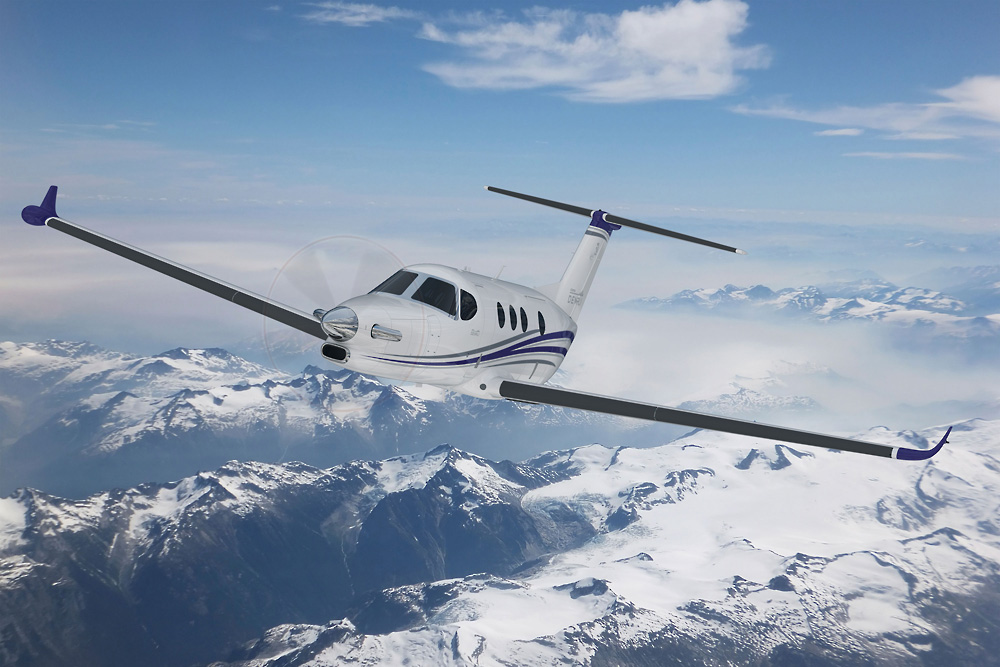 The Beechcraft Denali very much looks like the PC-12 so in pratice you may have trouble identifying them. The air intake and nose gear of both aircraft are a bit different, but it is easier to look at the tail area. The Denali has a smaller dorsal fin than the PC-12, no ventral fins and no bullet fairing in front of the horizontal stabiliser. (photo Textron Aviation Inc.)