The Falcon 2000 was Dassault's answer to the wide cabin Challenger 600 series. It roughly resulted from removing the middle engine from the Falcon 900, which necessitated a re-design of the rear fuselage. This creates a funny tail cone: a kind of upturned nose, ending in the APU exhaust. It is also a bit smaller. The typical Falcon cockpit windows and horizontal stabilisers with anhedral (poiting down) make recognition from similar types easy. 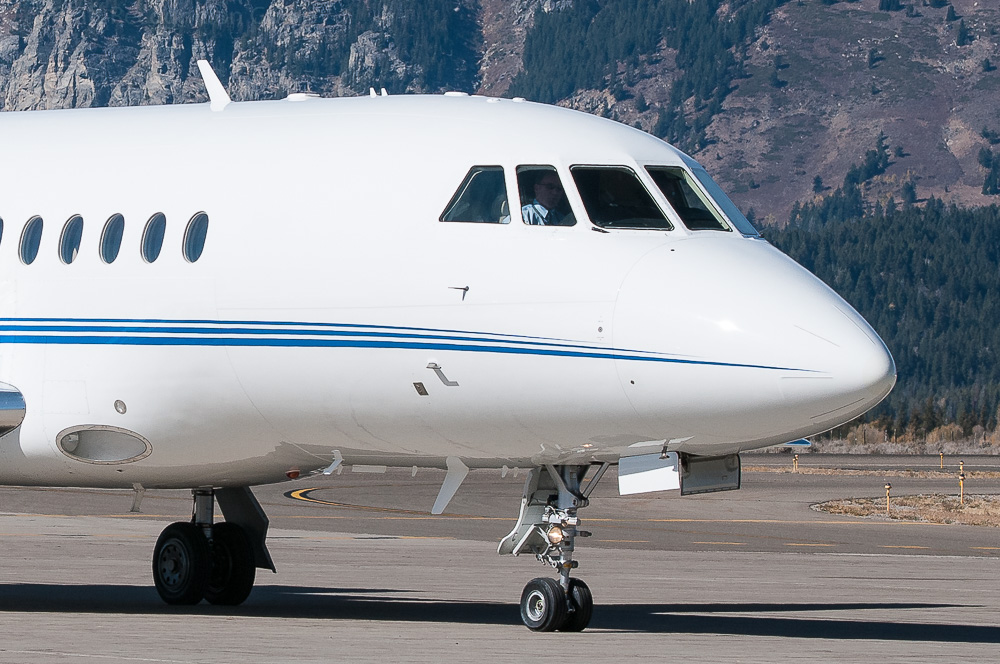 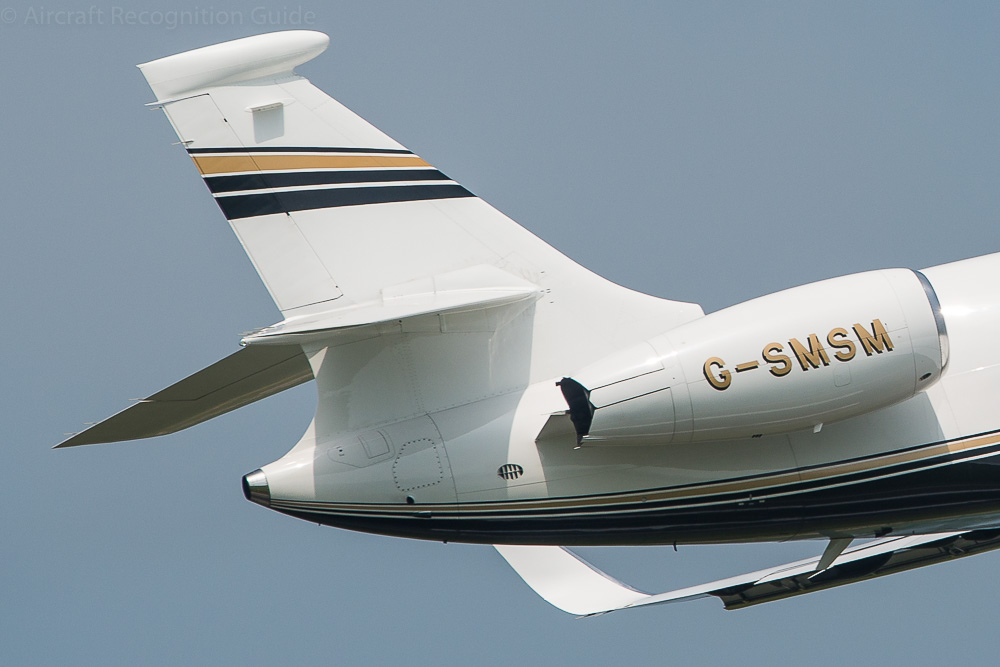 The tail of the Falcon 2000 with its horizontal stabiliser with anhedral (pointing down).

The first version of the Falcon 2000 has General Electric CFE738 engines. While the engines have nearly straight fan blades, it is easier to just look at the nacelles to recognise the Falcon 2000. At the front, just behind the main air intake, two small rectangular air intakes are visible. The PW308 equipped aircraft don't have these.

Note that Falcon 2000s can be fitted with winglets afterwards. However, this does not change the designation. 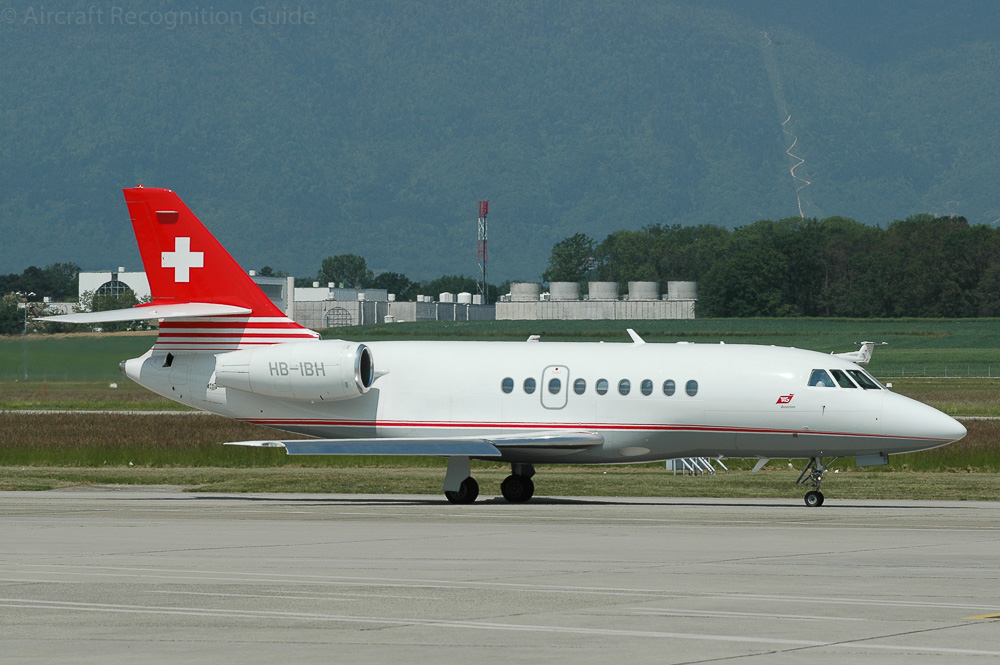 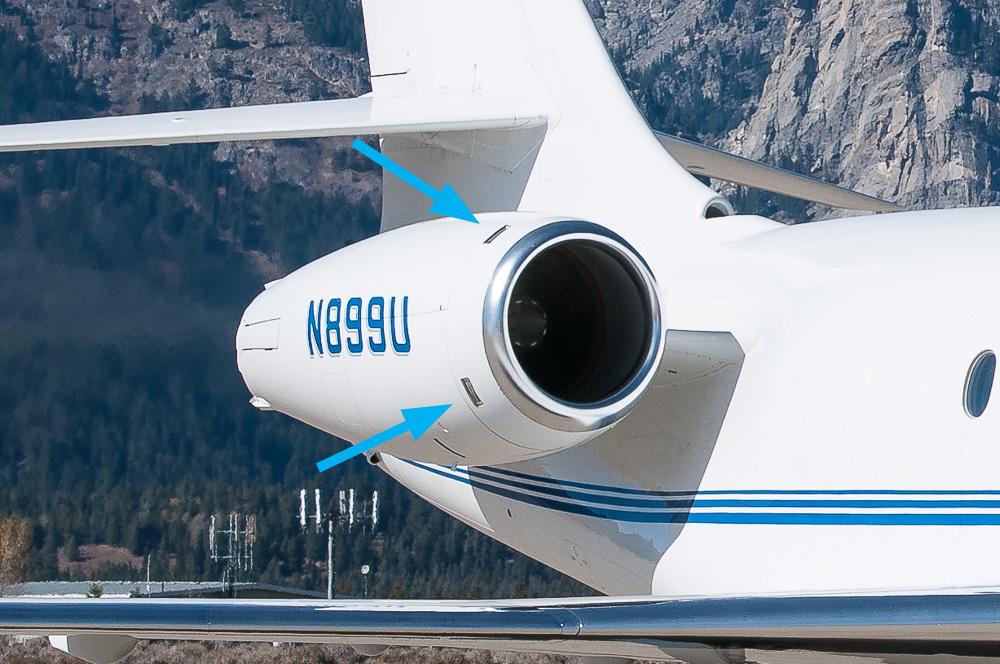 Engine nacelles of Falcon 2000. Note the two rectangular dark areas close to the front, typical for the CFE738 engines.

The Falcon 2000EX has PW308C Pratt & Whitney engines instead of General Electric’s CFE738. The former have more curved compressor blades, while the original engines have nearly straight blades. Just look at the front of the engine! Nevertheless, it is much easier to look at the presence or absence of the small rectangular air intakes at the front of the nacelles: the Falcon 2000EX does not have them.

Falcon 2000EX-EASy is the marketing name for the 2000EX with the Honeywell EPIC EASy avionics suite. This is not visible from the outside. 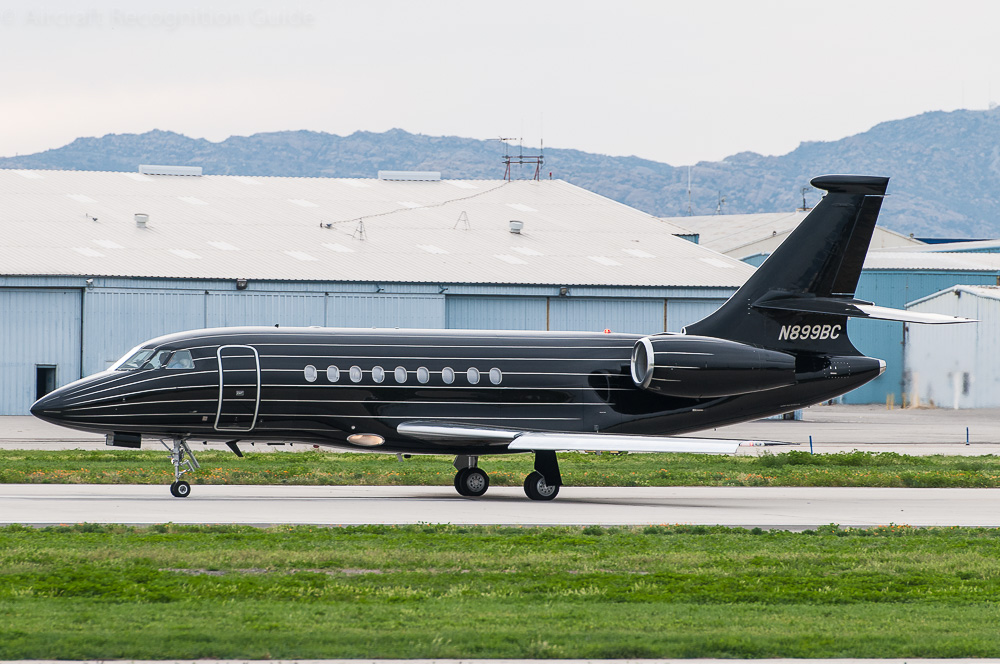 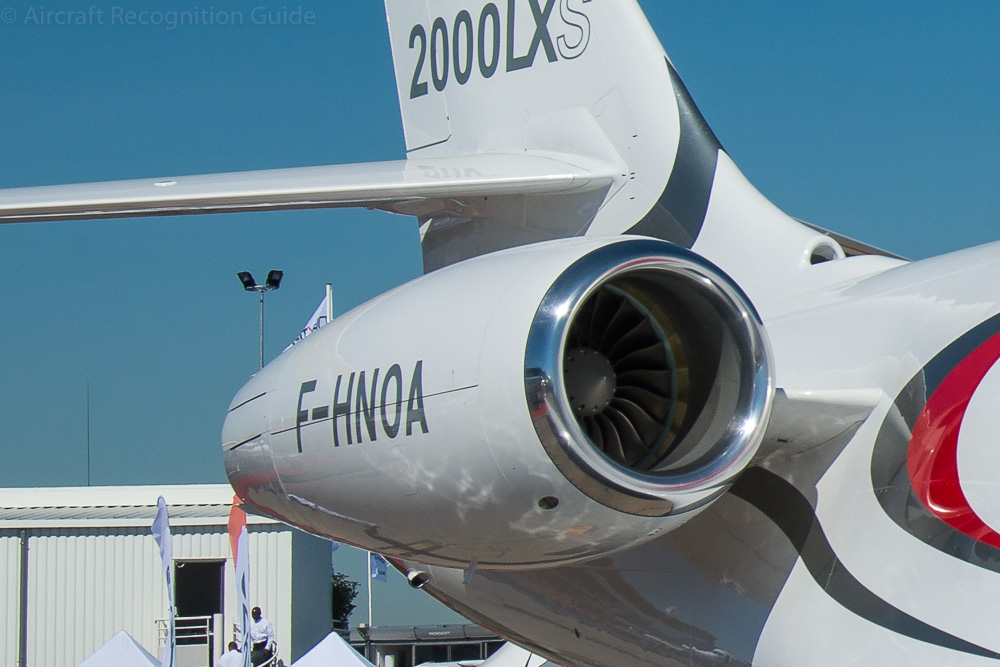 The engine nacelles of the Falcon 2000EX and later version, lacking the small rectangular air intakes of the original 2000. 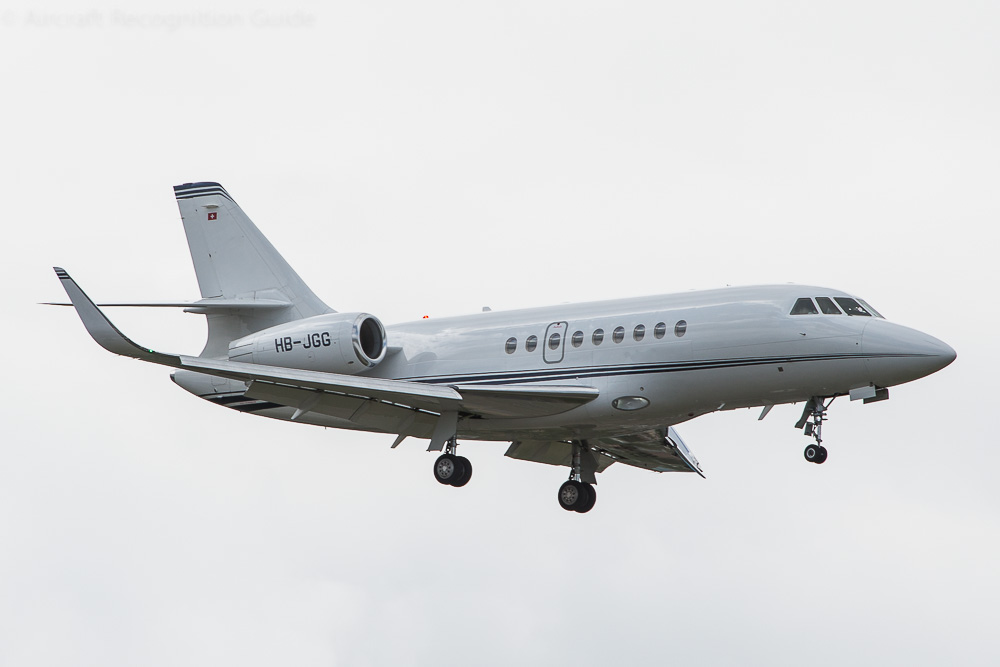 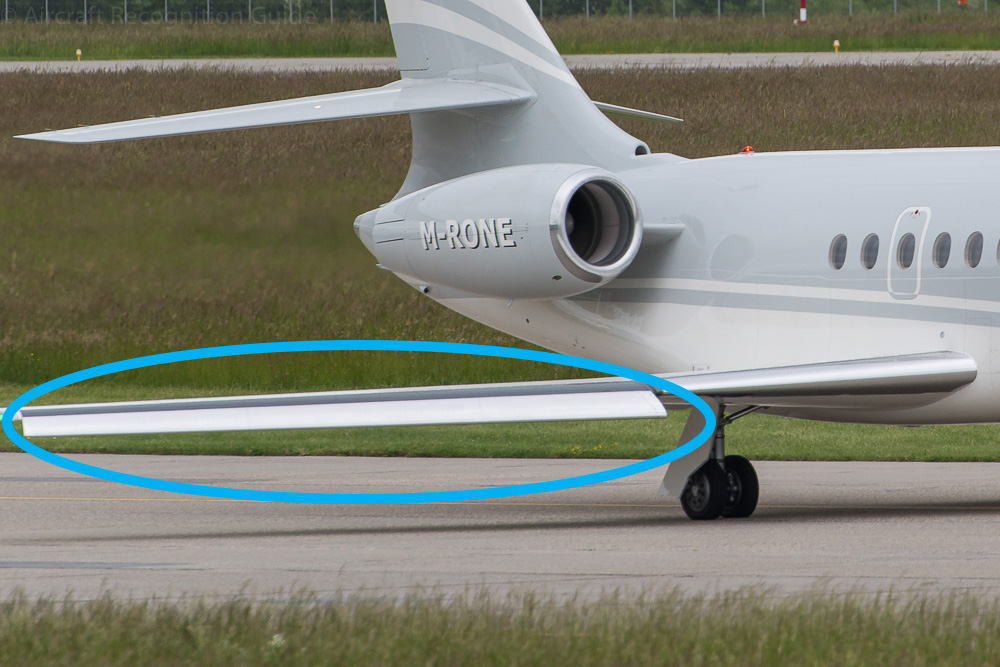 Wings of Falcon 2000EX/LX, with slats along a part of the wing leading edge.

The Falcon 2000S is a version with short take-off and landing performance. To enable this, the aircraft has slats across the full wing leading edge. Hence, it can only be recognised when the slats are extended.

The Falcon 2000LXS is the follow-up of the Falcon 2000LX, and is essentially a 2000LX with slats across the full wing leading edge like the 2000S. The main difference between both aircraft is in the range: the 2000S has a smaller fuel capacity than the 2000LXS. 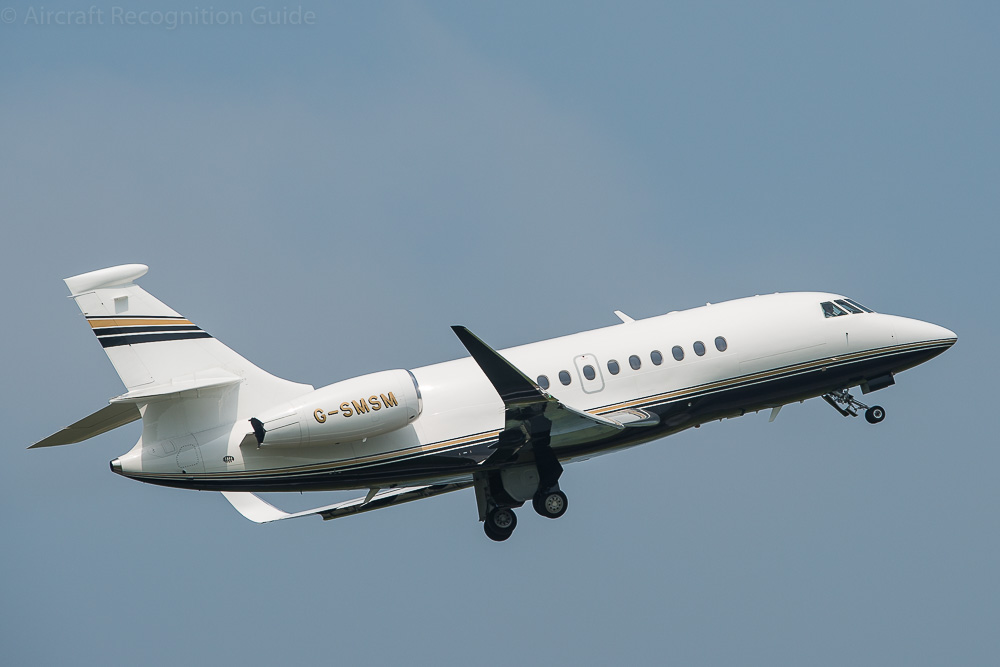 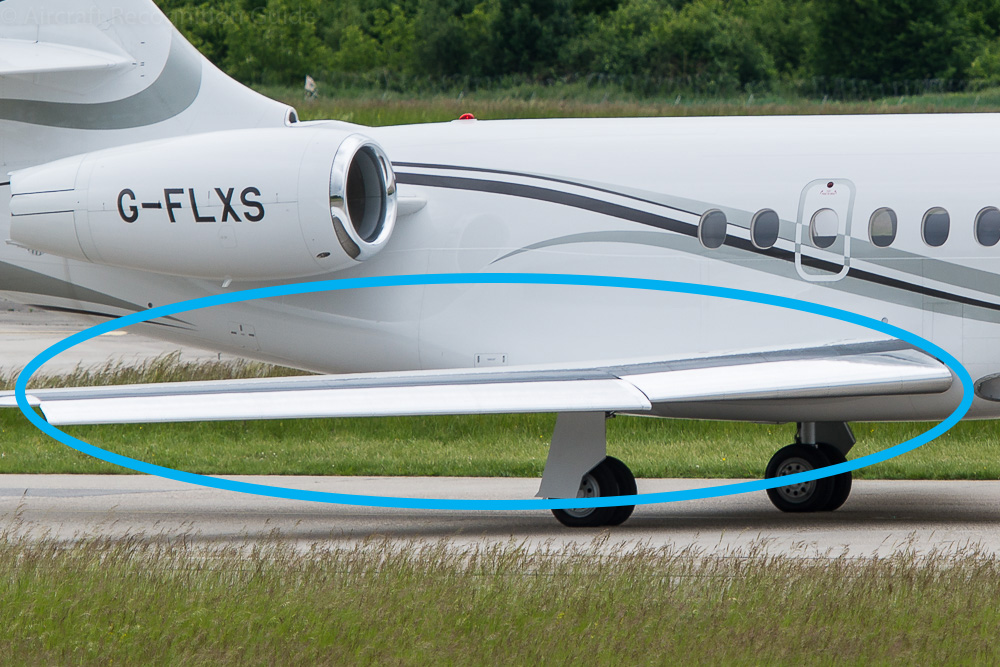 Slats along the whole wing leading edge, the recognition point of the Falcon 2000S and 2000XLS. 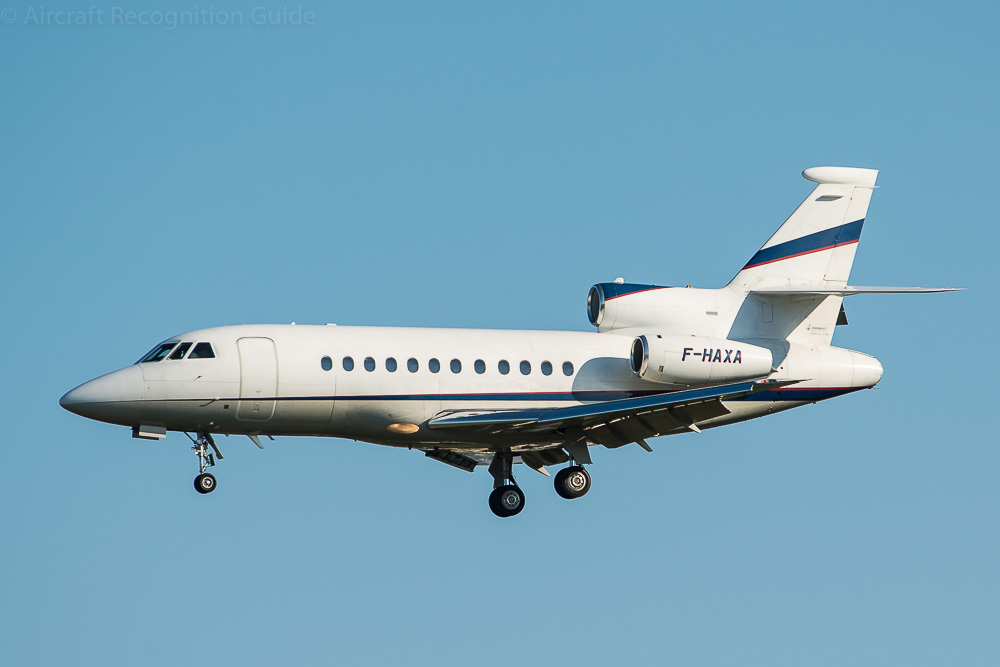 The three-engined Falcon 900 shared a lot of components with the Falcon 2000, so if you see only a part of the aircraft you might them mix-up. Otherwise the third engine on the Falcon 900 is a very clear recognition point! 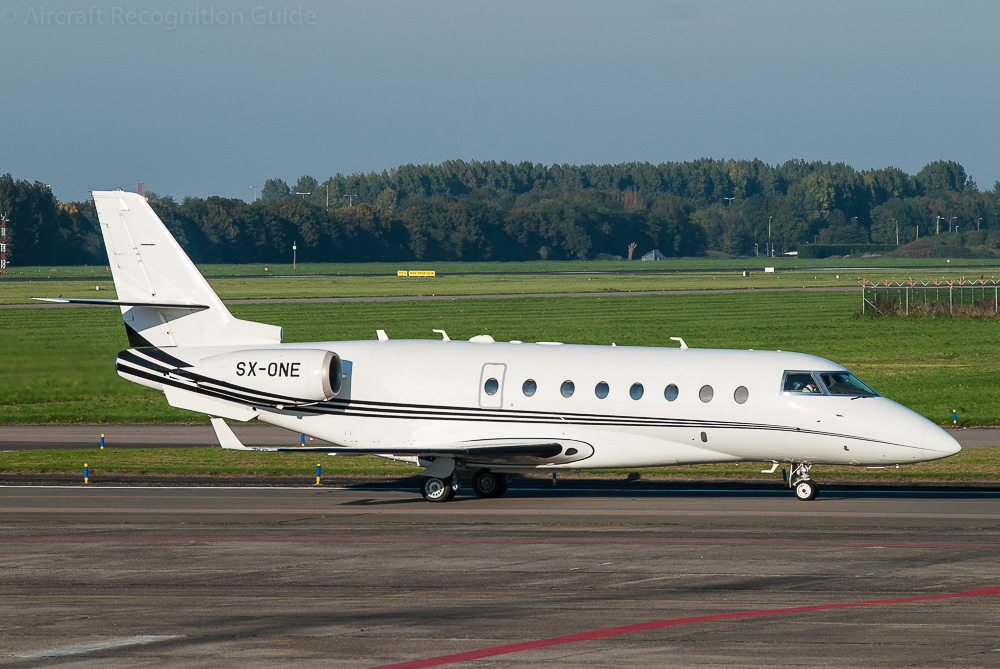 This aircraft is similar in size and general configuration as the Falcon 2000. The main differences are in the number of cockpit windows (four versus six), shape and spacing of cabin windows (oval versus rectangular) and anhedral of horizontal stabiliser (none on the IAI1126/G200). Also notable is the relatively short landing gear of the Galaxy/G200.