To recognise this trijet airliner with three engines at the rear fuselage from the other in this category you can look for the typical Boeing nose with two eyebrow windows, inherited from the 707 and continued on the first three generations 737. Moreover, it has only two wheels on each main landing gear leg and no forward pointing bullet fairing at the top of the vertical stabiliser. Instead it has a backward pointing bullet fairing. Finally the engine have a single exhaust. 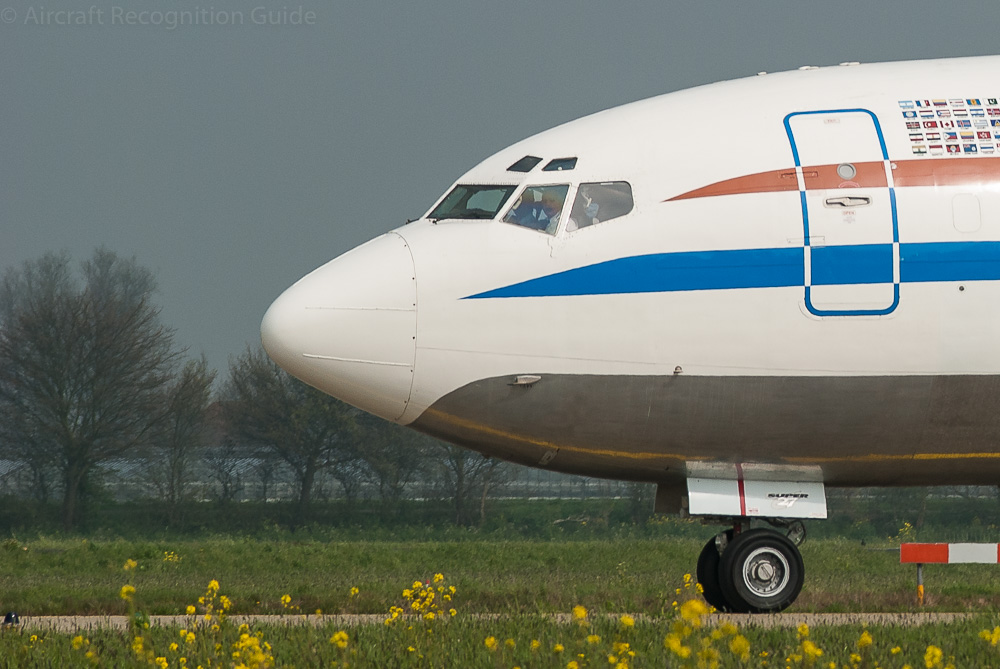 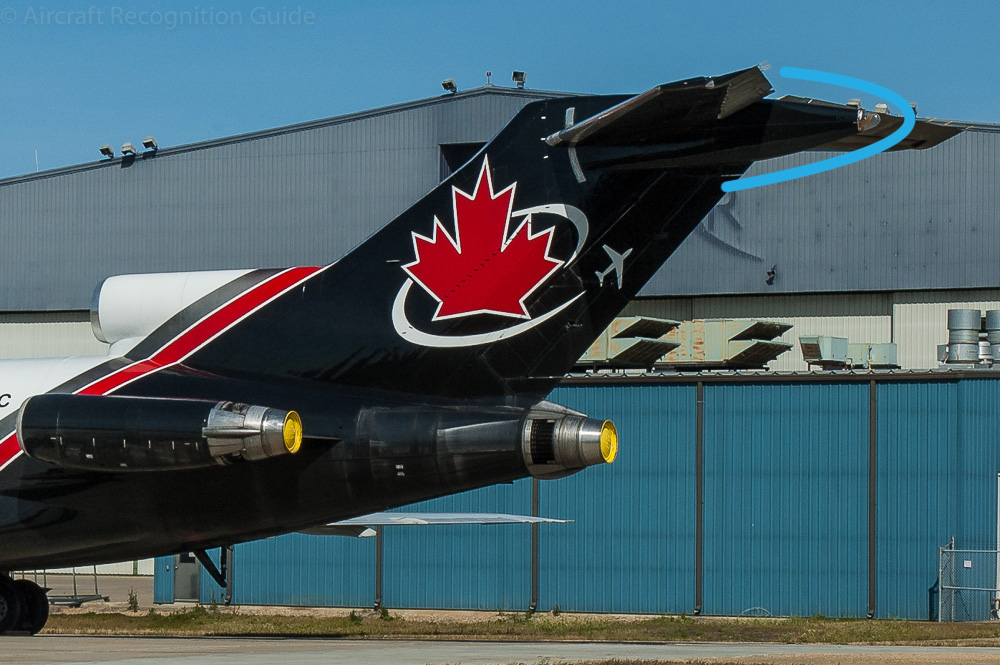 To differentiate between the 727 subtypes you have to look at

Note that some Boeing 727s have been fitted with winglets afterwards, but this is not reflected in the type designation.

The first version of Boeing 727 was the series 100, which is the short-body version. Typical for the short-body 727s is also the oval shaped air intake for the centre engine. On the long-body aircraft it is round. Unlike the 727-100C and -100QC mentioned below it has no cargo door. Note that in many cases the "1" of the 100 is omitted from the full type designation. For example aircraft for United Airlines were delivered as 727-22, and not as 727-122.

The US Air Force has used five 727-100Cs, which were converted commerical aircraft. They were designated C-22A and C-22B, depending on the original aircraft type. 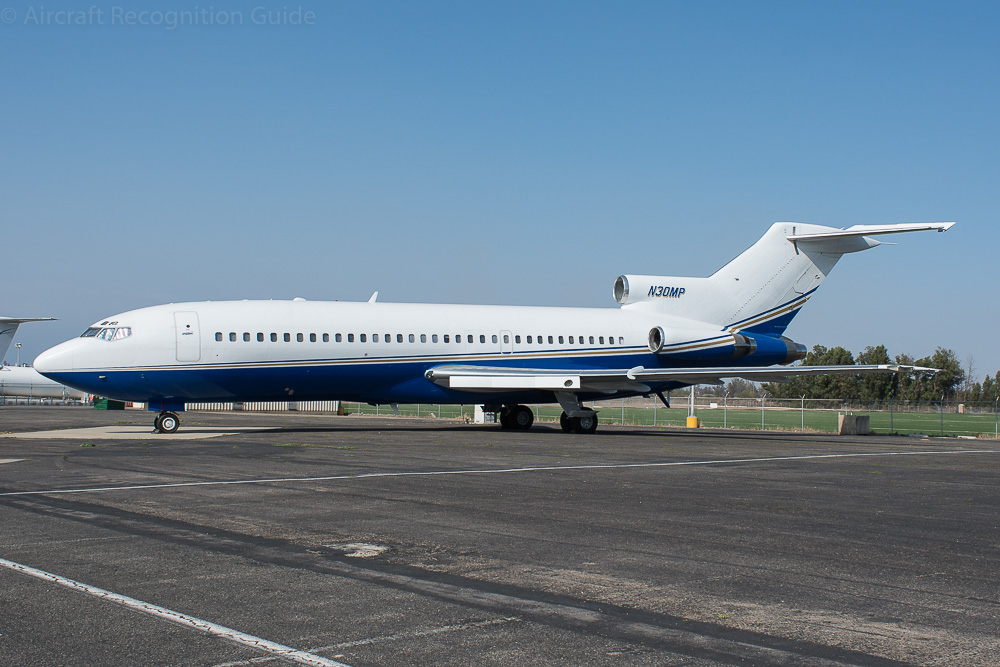 The 727-100C and -100QC are respectively the Convertible and Quick Change variants of the basic 100 series. The subtypes only differ by the type of cargo floor. Both have a large cargo door on the left side, in front of the wing. Sometimes the cargo door is not clearly visible, but you can also recognise the version by the two cabin windows close together, at the beginning and end of the door. 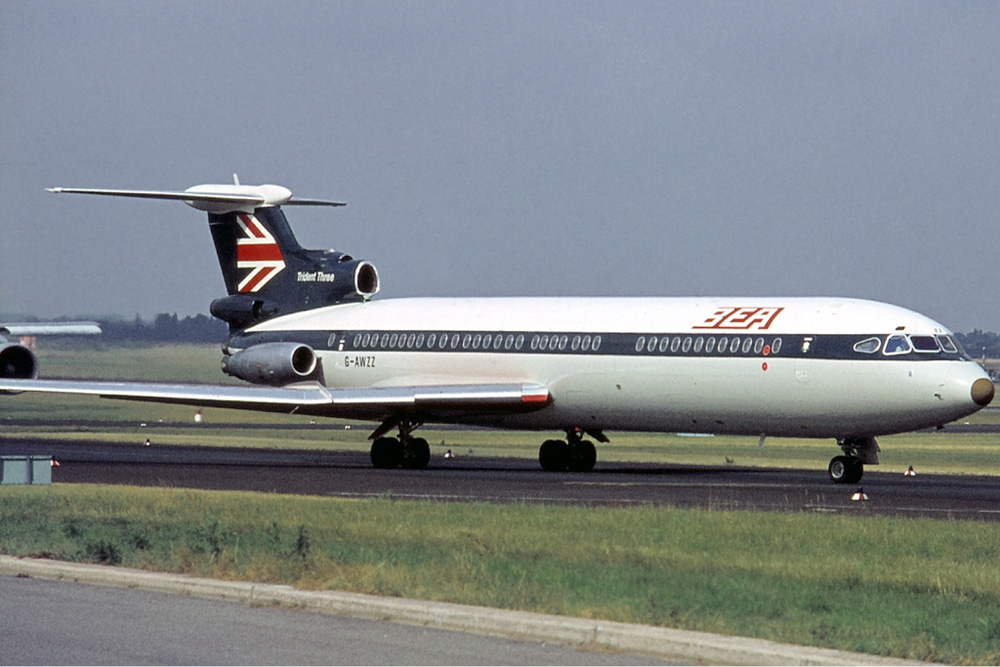 The Hawker-Siddeley Trident has as main differentiating characteristic a sidewards retracting nose landing gear and four wheels on the main landing gear legs, all on one axis. 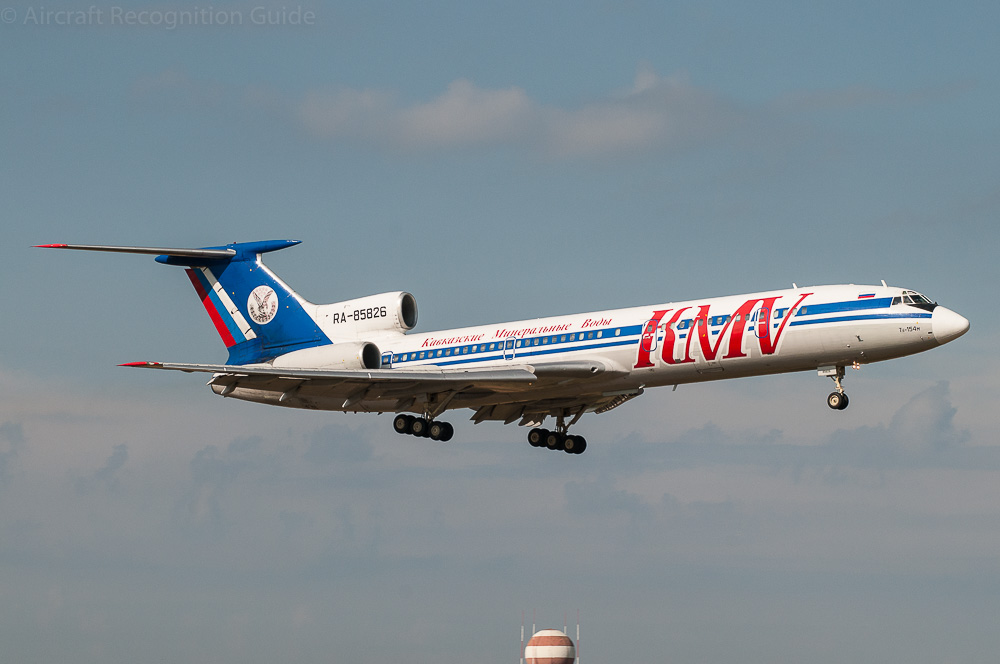 The other similar sized tri-jet is the Tupolev 154. This can best be distinguished from the Boeing 727 by its main landing gear, with six wheels on each leg. Also note the forward pointing bullet fairing on top of the vertical stabiliser. 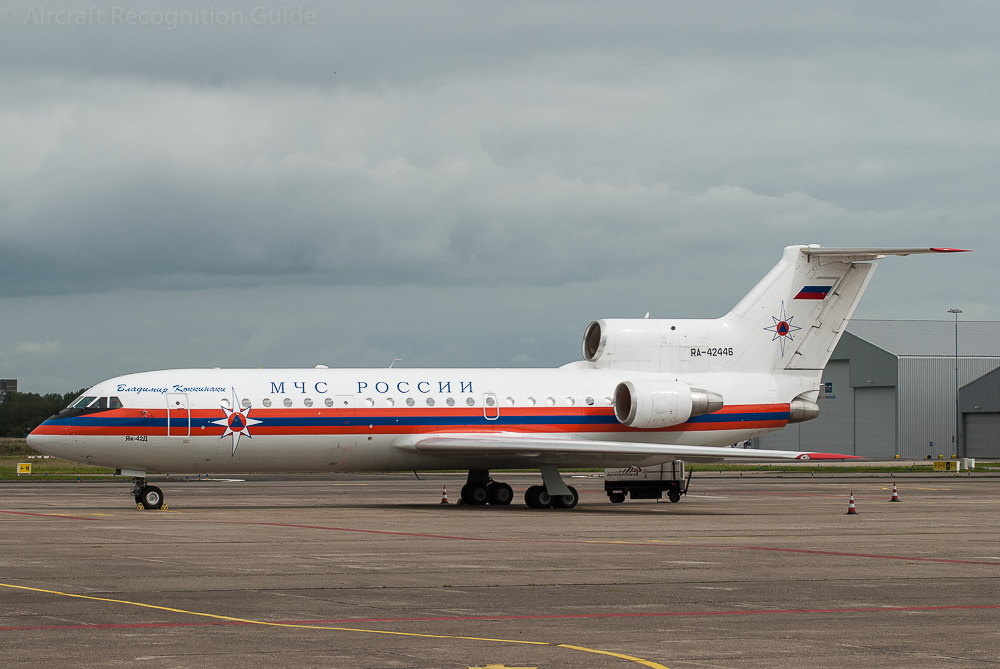 Finally the Yak-42 is a bit smaller than the Boeing 727-100, but more notable are the engines with separate fan and core exhausts. 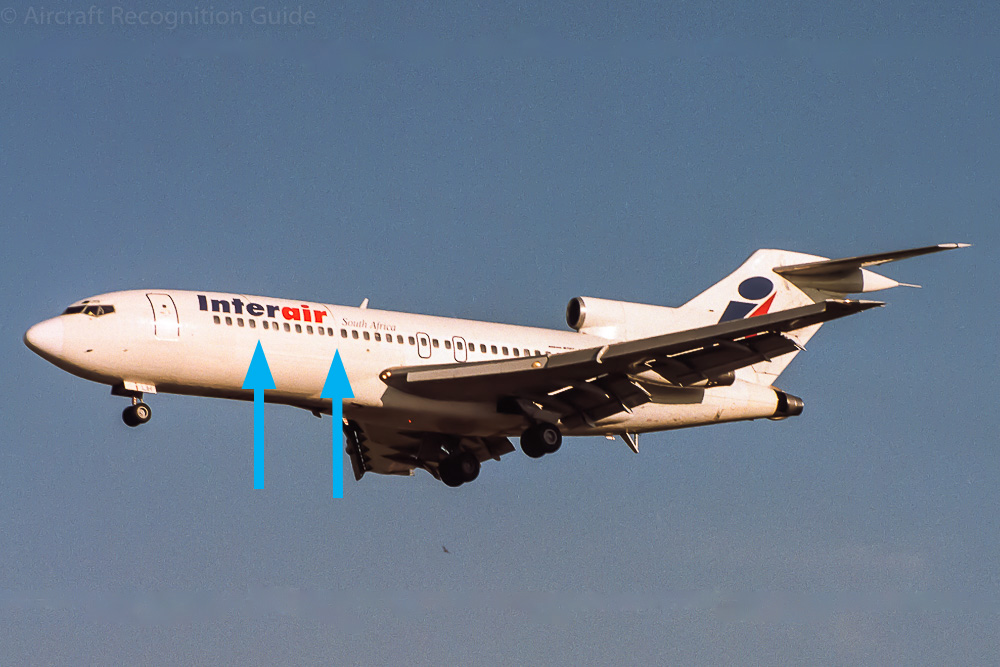 Original 727-100 passenger aircraft converted to cargo aircraft are known as 727-100F. Most often the cabin windows of these aircraft are painted over. However, this may also be the case for 727-100C and -100QC aircraft used solely for transporting cargo. These retain their original designation. 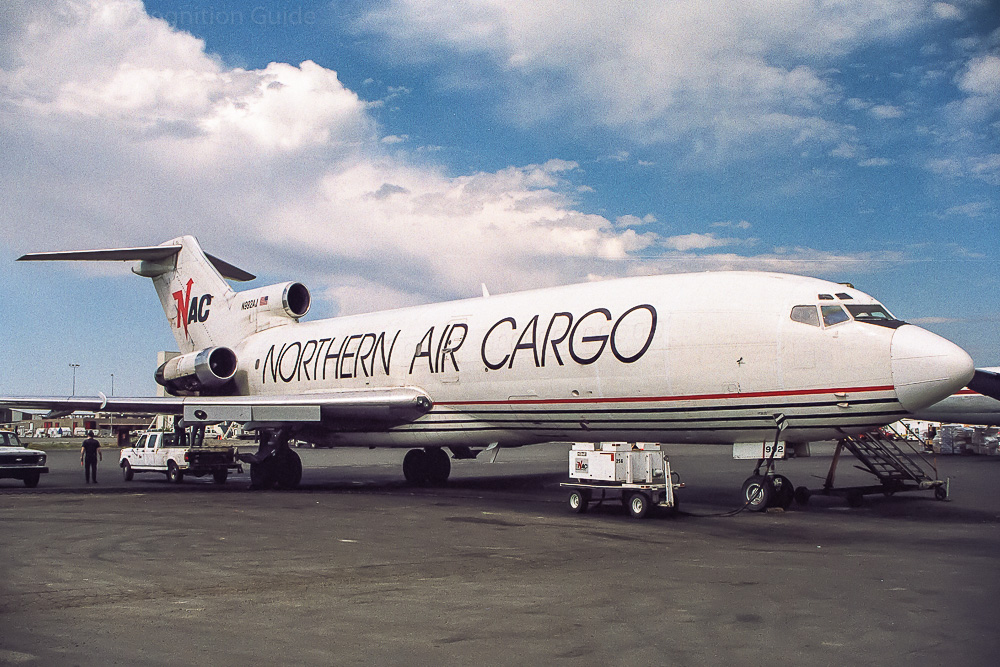 Boeing 727-100F, note the oval shaped air intake on top of the fuselage, characteristic for the 727-100 series

Dee Howard designed a re-engine modification for UPS to extend the life of their 727-100 freighters. The company used the Rolls Royce Tay engines for this. These have a much larger diameter than the original Pratt & Whitney JT8Ds. Therefore a structural modification was required for the middle engine. It has a larger air intake resulting in a bulge on top of the inlet. The modified model is known as Boeing 727-100QF, Quiet Freighter.

One corporate 727-100 was also converted with Tay engines. 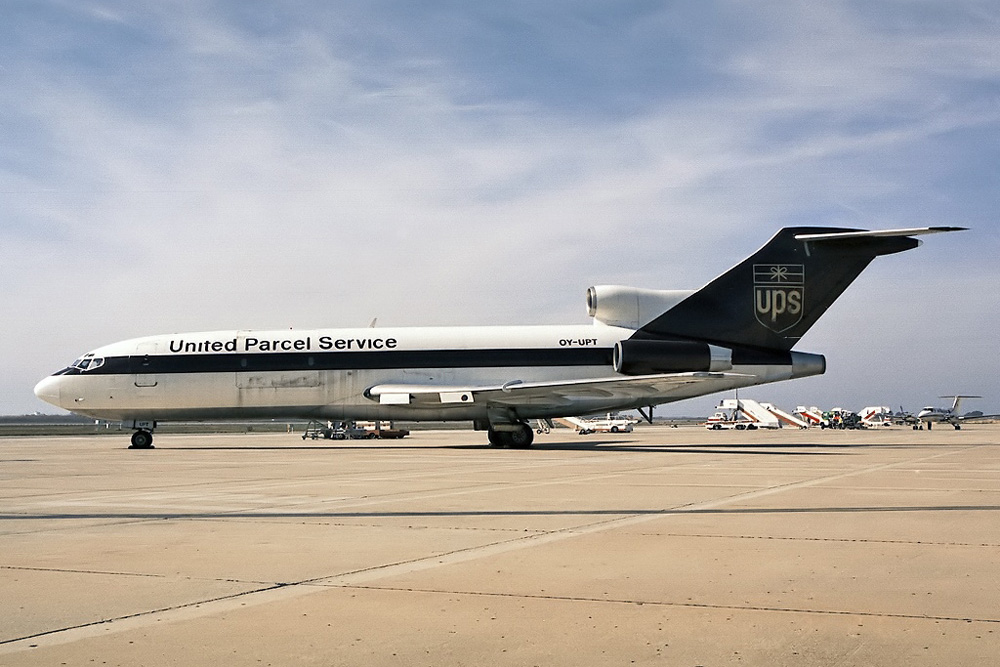 UPS was the main user of the Quiet Freighter version of the 727, the Boeing 727-100QF. (photo: Pedro Aragão/WikiMedia) 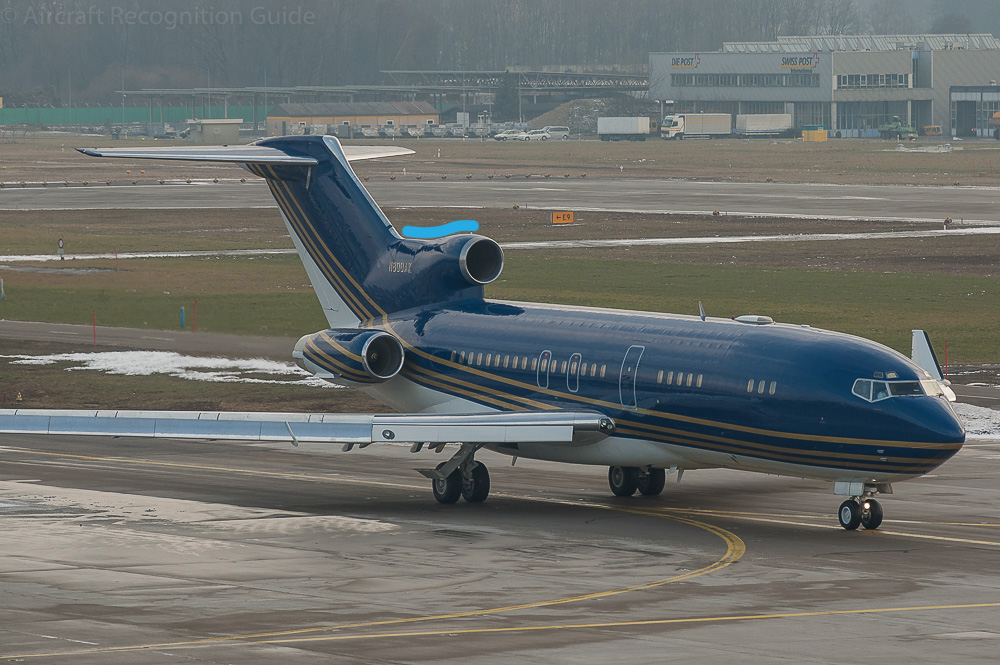 A corporate Boeing 727-100 with Tay engines. Note the curved top of the middle air intake, in front of the tail.

A fuselage stretch of somewhat more than six metres resulted in the second main version of the Boeing 727, the 727-200. Apart from the fuselage length the air intake of the middle engine is also a clear recognition point, as it is round instead of oval on the Series 100. This version proved to be popular, which further increased with the introduction of the Series 200 Advanced. This has more powerfull engines, an increased maximum take-off weight and thus better performance than the original 727-200. Nearly a thousand of this version were built. It is however not distinguishable from the basic 727-200. 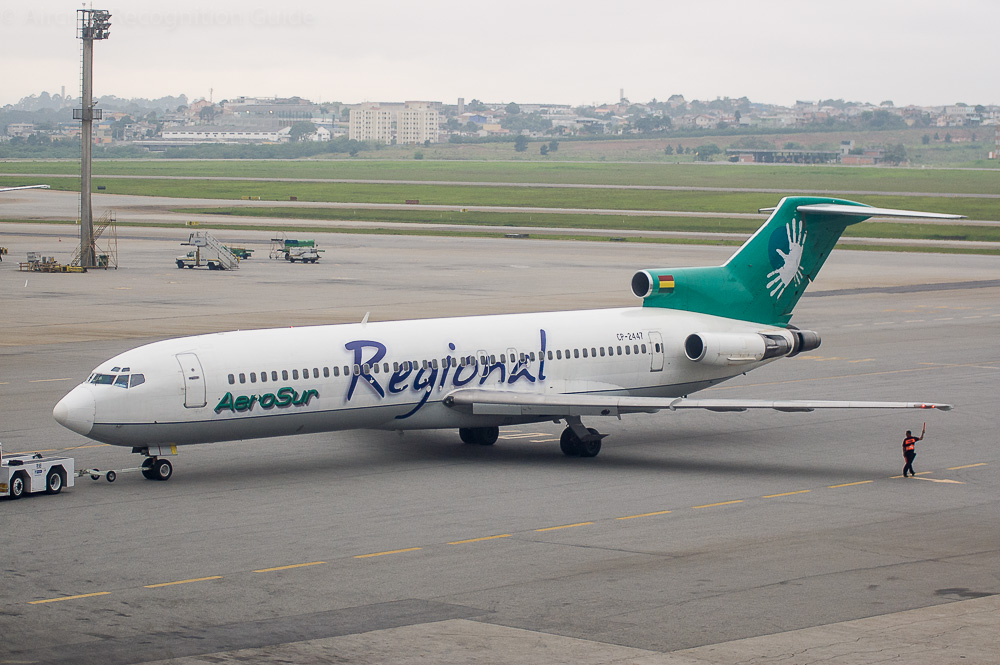 The Boeing 727-200 was not so populair as Convertable. Only one 727-200C was built. It can be recognised by the cargo door in the left front fuselage and the many cabin windows. The pure freighter versions have no cabin windows or painted over windows.

After their carreer as passenger aircraft many 727-200s ended up being converted to cargo aircraft. Boeing also built a dedicated freighter version. Both are designated Boeing 727-200F. The new-built aircraft have no cabin windows, those of the converted aircraft are usually painted over. 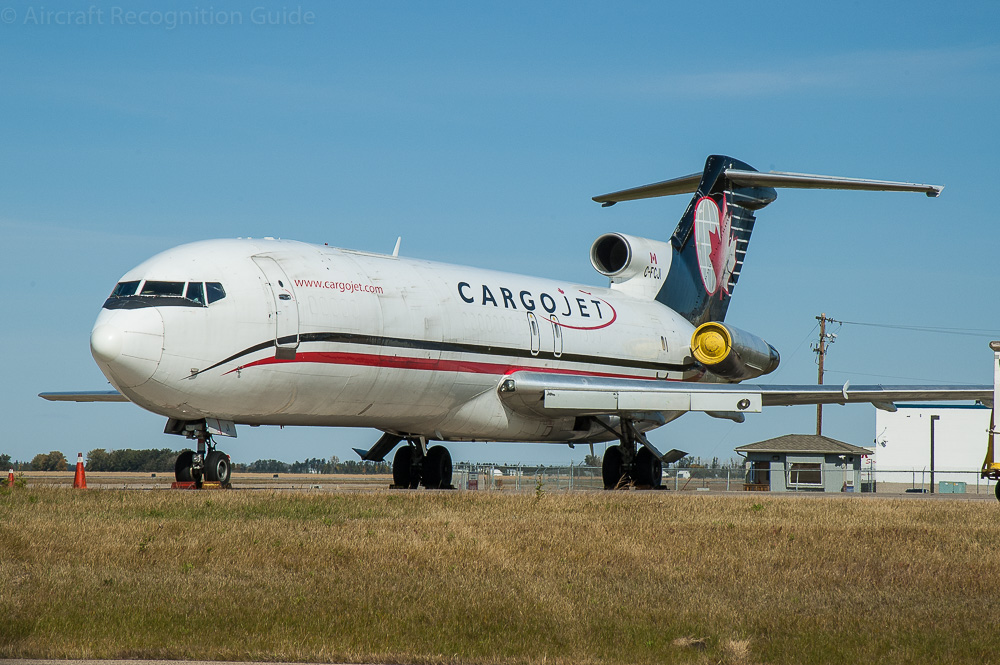 Boeing 727-200F, converted from passenger aircraft, as you can see the windows are painted over. 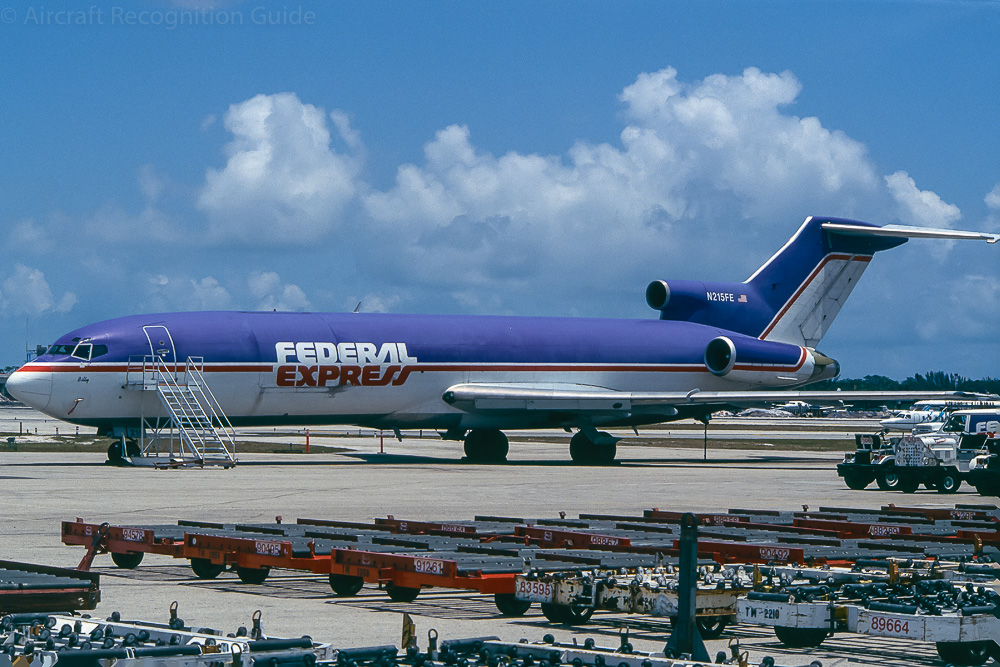 In the 1990s noise regulations became more strict. To increased the useful life of the 727s many received modifications to make them Stage III compliant. Sometimes this involved adding hushkits to the engines, often visible by longer exhaust pipes. Other companies made changes to the trailing edge flaps on the wings or added winglets to improved fuel efficiency.

Valsan Partners developed the Super 27, sometimes called the 727RE. On this aircraft the outer two engines are replaced by larger diameter JT8D-200 series engines, known from the MD-80 series. This is how to recognise the Super 27. The original middle engine is kept, but fitted with a new exhaust pipe. 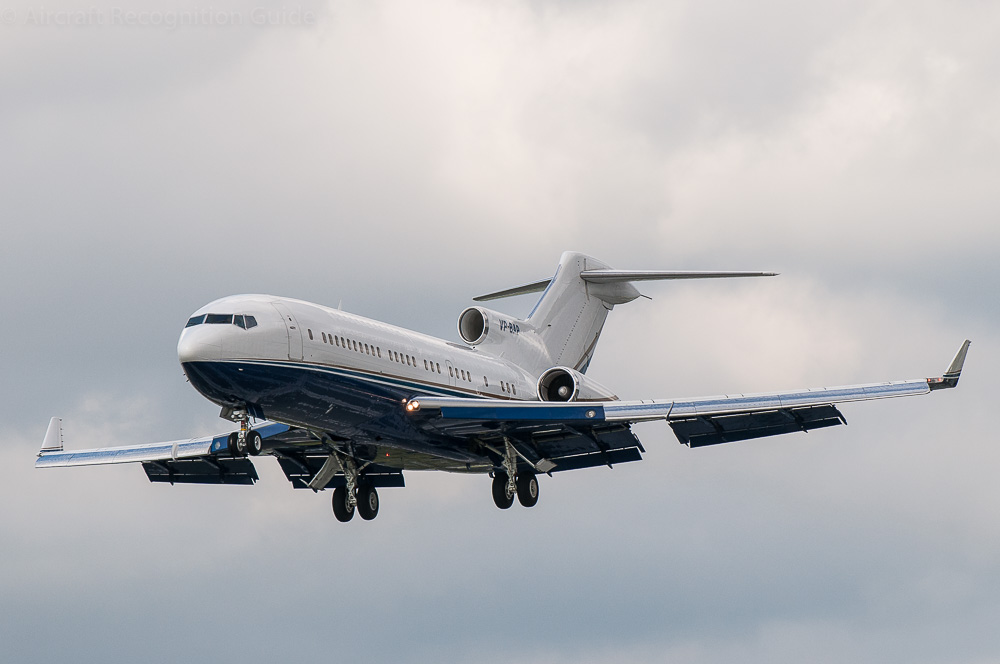 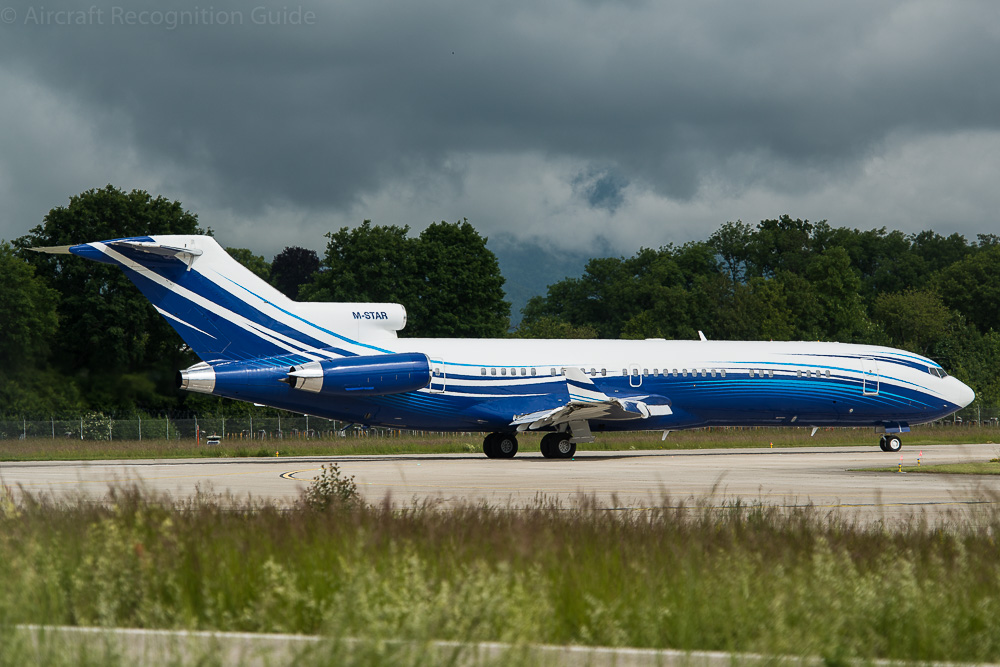