Aérospatiale and Alenia jointly developed the ATR42 commuter aircraft in the 1980s, as a response to the deregulated air transport market in the USA. The 45-50 seat ATR42 was later joined by the longer ATR72. The aircraft can especially be recognised by large vertical stabiliser and associated dorsal fin, with two bents in the leading edge. Other characteris­tics are the short landing gear, retracting in pods underneath the fuselage, and the poin­ted tail cone. The cabin windows are rectangular with rounded corners. 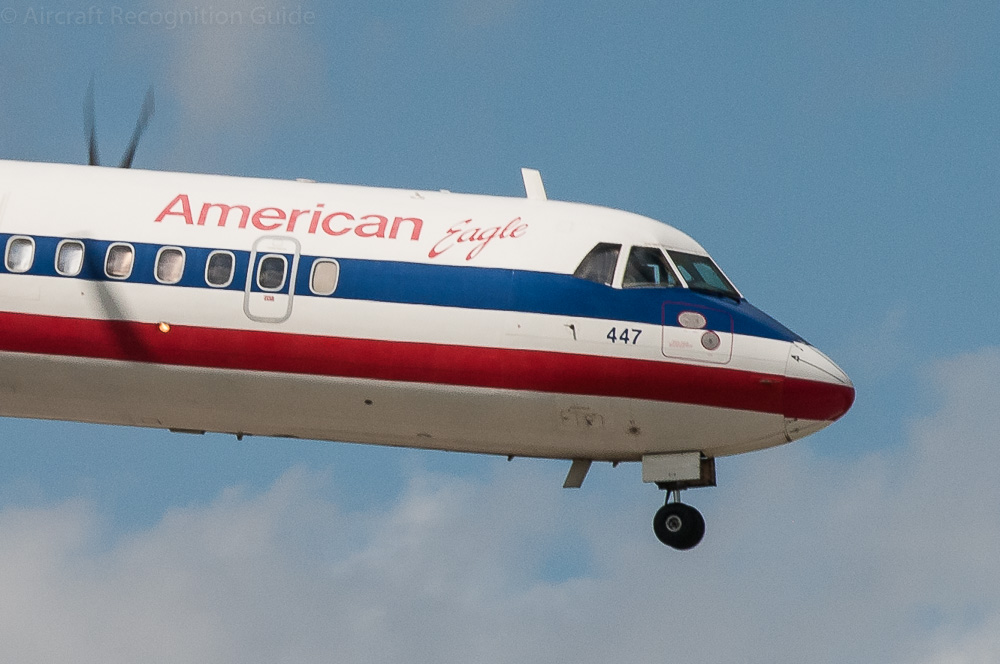 Nose section of ATR42/ATR72, with the fairly blunt nose and six cockpit windows. 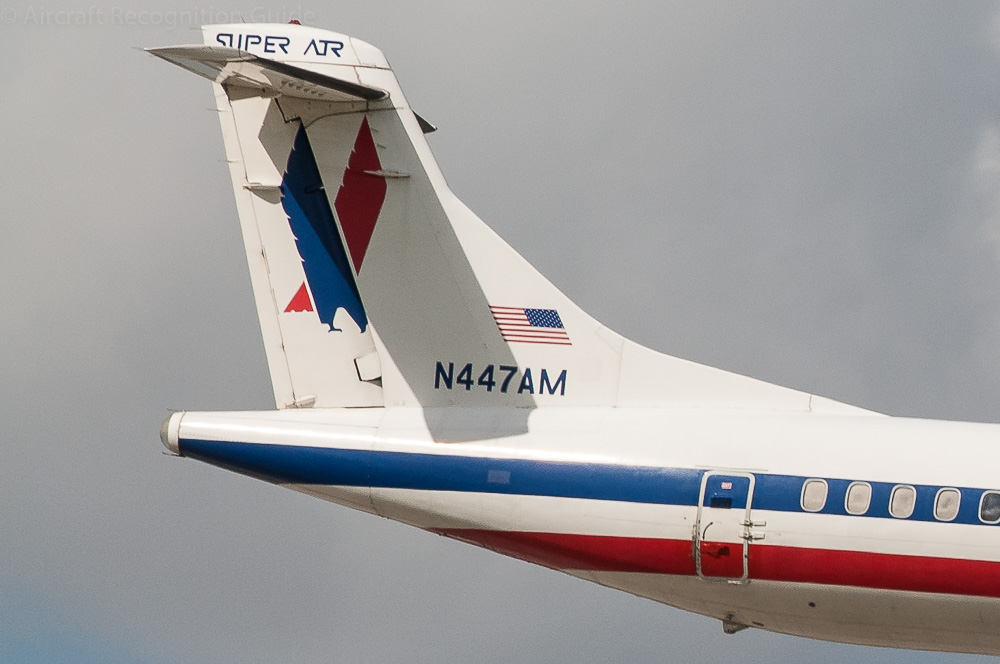 Tail of ATR42 & ATR72, with the characteristic tail cone and vertical stabiliser with to step dorsal fin.

The different versions of the ATR family can be recognised by:

These are all similar in appearance from the outside and only differ in exact engine model and operating weights. They have in common a short fuselage and four blade, non-curved propellers. 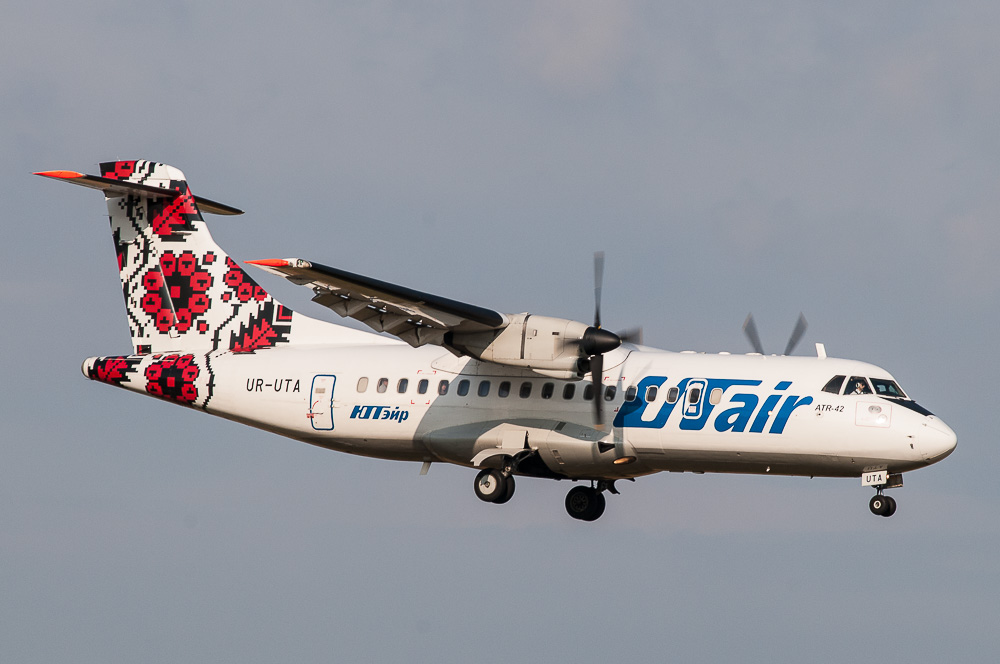 Here is an ATR42-320, as example of the first generation of short body ATR42s. You can clearly see that the propellers have four blades.

When converted to dedicated freighter, by the removal of seats, installation of a cargo floor and replacement of cabin windows by metal plugs, the ATR42 is called ATR42-300F or ATR42-320F. The original front bagage door is used to (un)load the cargo. 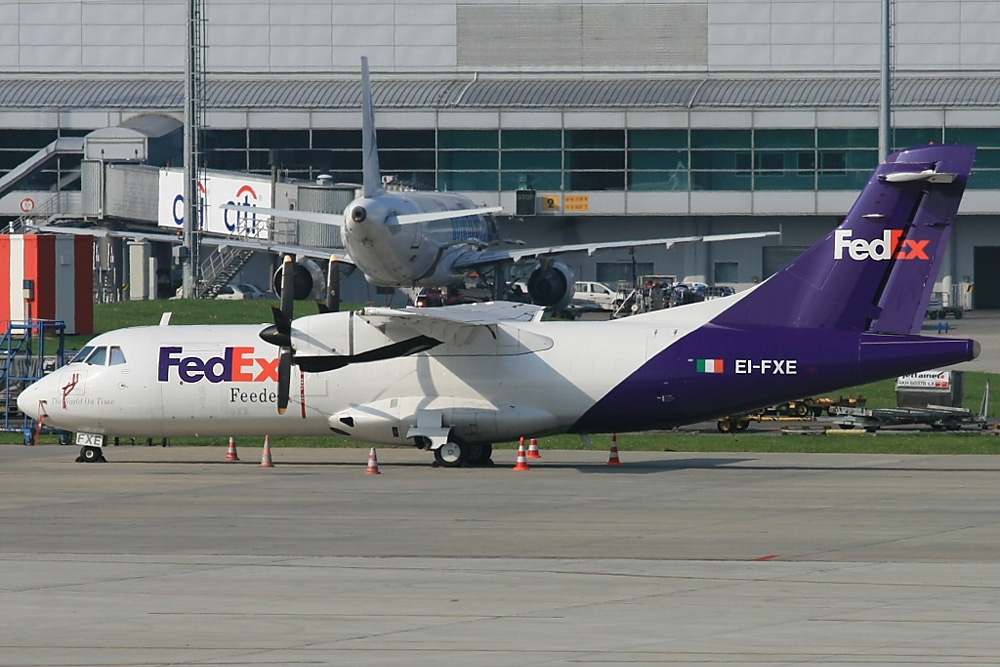 The cargo conversion of ATR42-300/320 lacks cabin windows, so it is easily recognisable. (photo: Alan Lebeda/WikiMedia) 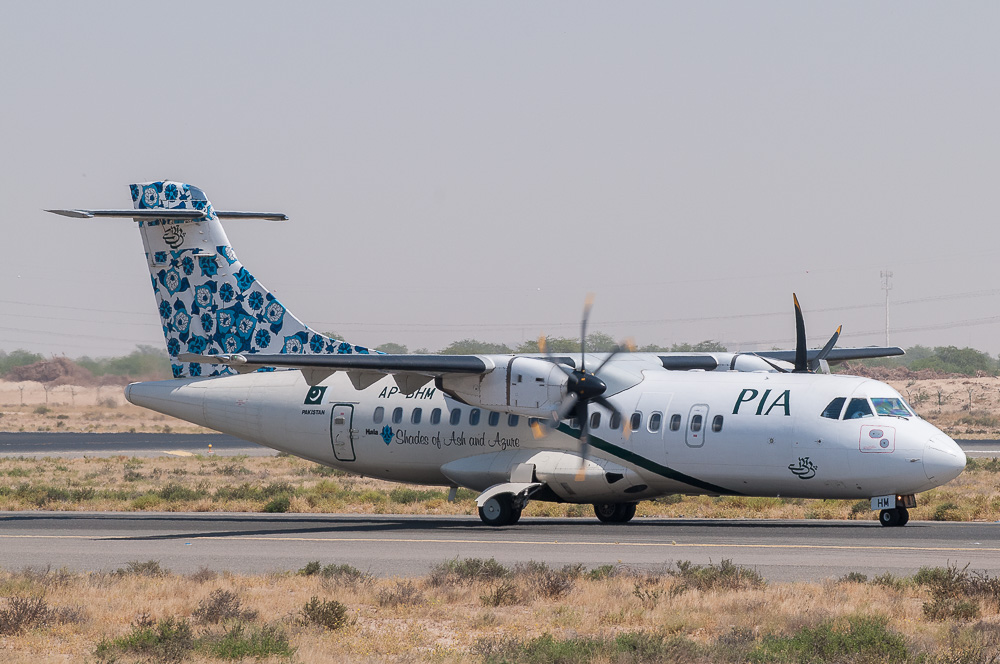 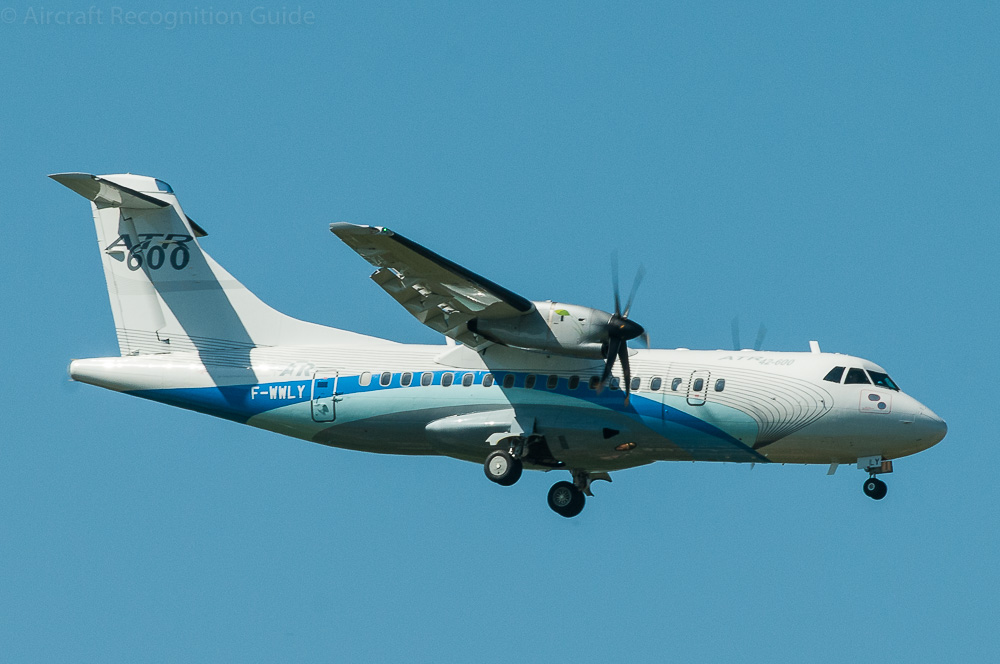 The ATR42-600 is essentially an ATR42-500 with a new avionics suite. However, you cannot see that from the outside.

Able to operate from short runways the ATR42-600S (with S for STOL) has a larger rudder than the standard -600. The area is increased at both the trailing edge and the top.

This is a stretched ATR42, which looks otherwise basically the same as the baseline model. The subtypes -101 and -201 have in common a normal cabin entry door in the forward fuselage (on the left and right side), in addition to the one in the rear fuselage. Also common are the four blade props, with non-curved blades. Both versions are externally the same and only differ in operating weights. 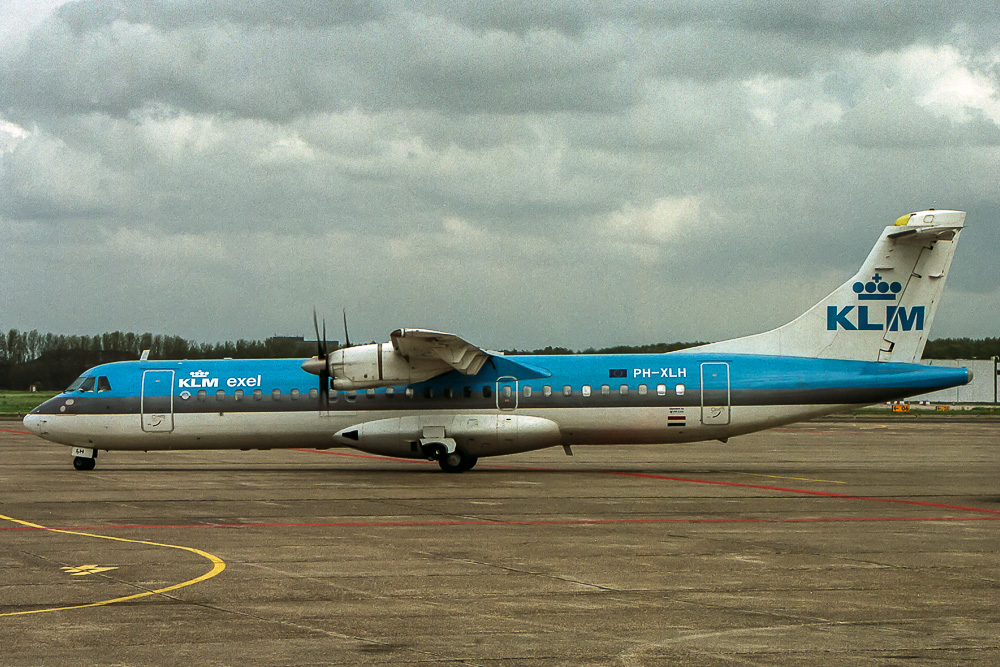 The ATR42-201 shown here has a normal forward cabin door and one at the back. A smaller emergency exit is under the wings. Note the four blade, non-curved props. 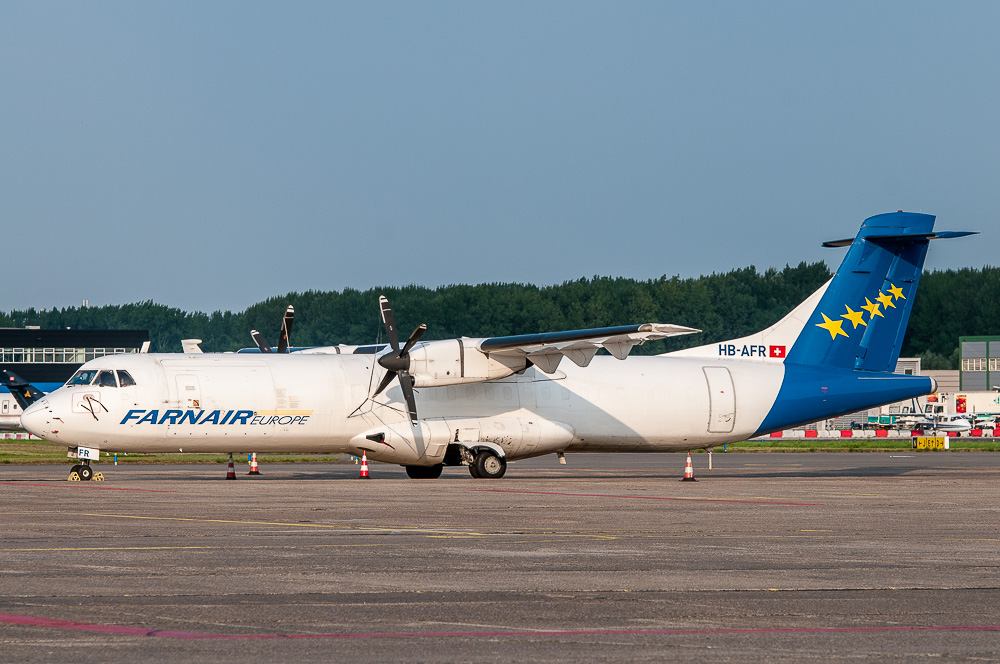 The ATR72-201F has a wider cargo door than the ATR72-202F. The non-curved propellers are clearly visible. 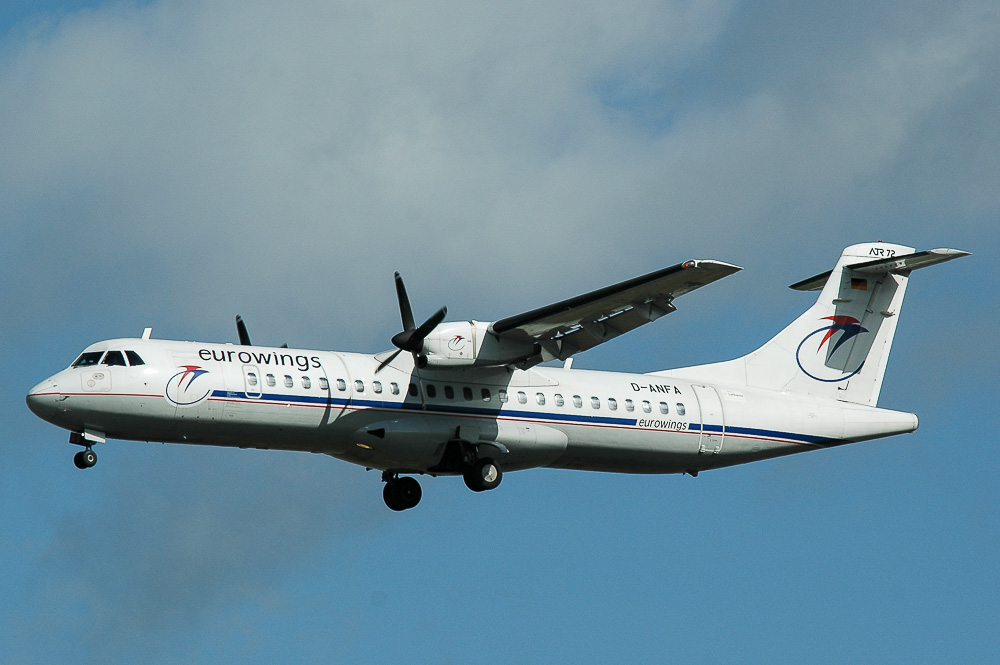 The cargo/bagage door is not very visible on this ATR72-202, but you can clearly see the small emergency exit at the first cabin window.

These are the cargo converions of the ATR72-102 and -202. As these aircraft already have a cargo door no dedicated one is added. This door is less wide though than on the ATR72-101F and -201F. Of course the cabin windows have been replaced by metal plugs. 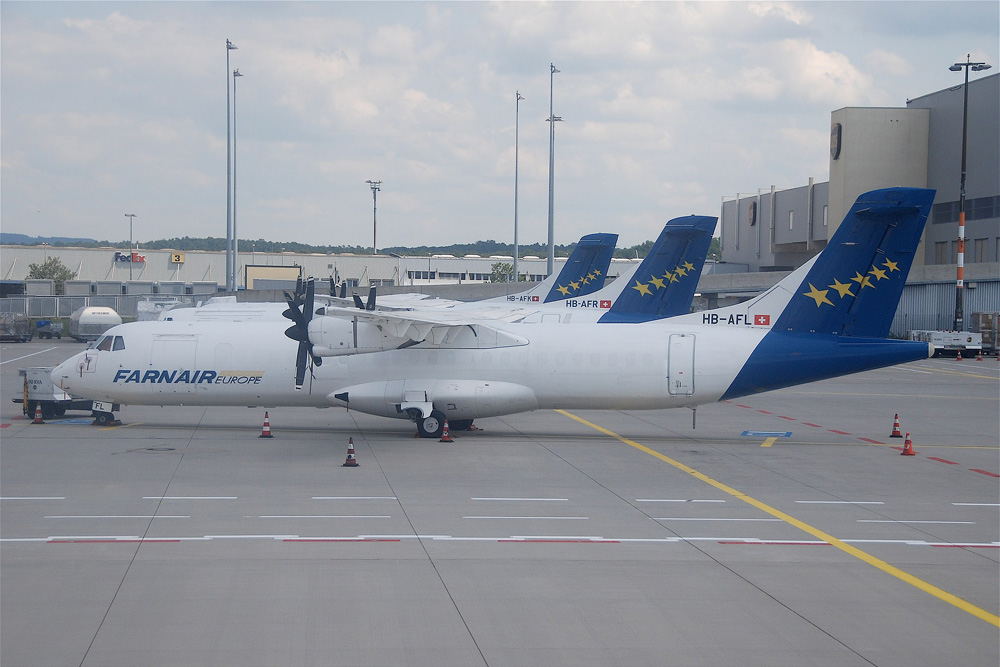 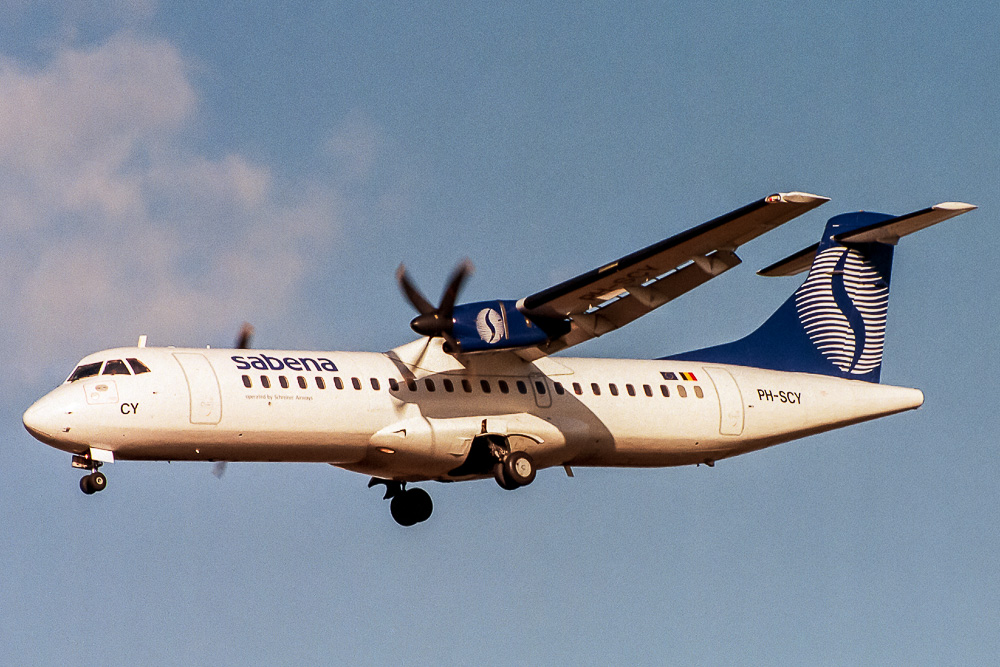 You can see a normal size entry door behind the cockpit and four curved blade propellers with bigger prop spinners, so this it identified as ATR72-211.

This is an ATR72-211 with the same door configuration as the ATR72-102/202, so a forward cargo/bagage door with a small emergency exit next to it. 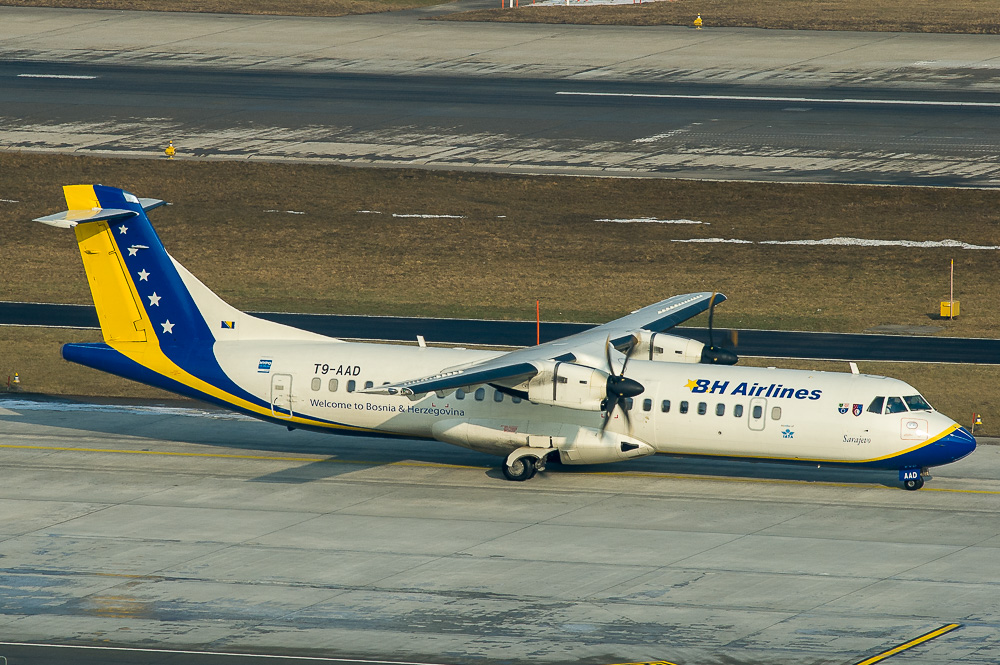 From the right side you can also differentiate the ATR72-211 from the ATR72-212, as the -212 shown here has a small emergency exit at the front. 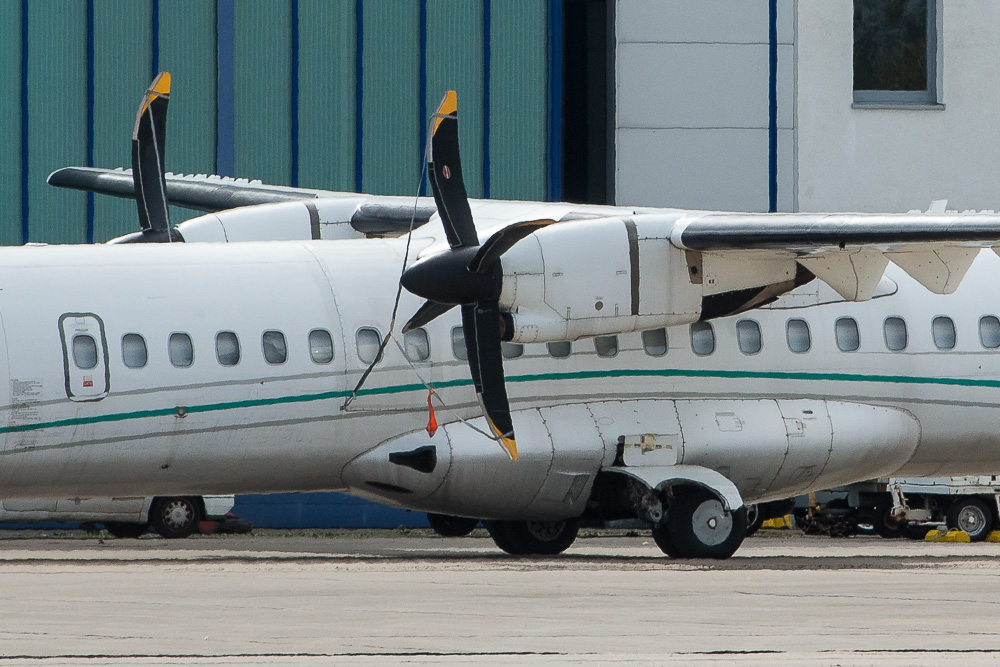 A detail of the props of an ATR72-212. Note the curved blades, four in total, and bigger prop spinner.

The second generation ATR72 has different engines than the first generation, like for the ATR42. Similarly the ATR72-212A (marketed as ATR72-500) has six blade props with curved blades. The door configuration is the same as on the ATR72-102, -202 and -212. Additionally, the -600 (officially still designated ATR72-212A) has an updated avionics suite.

The Italian navy operates an anti-submarine warfare (ASW) version of the ATR72-600, designated P-72A. It is a boom extending from the tailcone and various bulges under the fuselage, as well as hard points for torpedos under the front fuselage.

Another military version is the maritime patrol variant, called P-72B in Italian service with the Guardia di Finanza. This has just a radar bulge under the front fuselage as an external feature. Other operators of the patrol version of the ATR72-500 and -600 are Pakistan and Turkey. 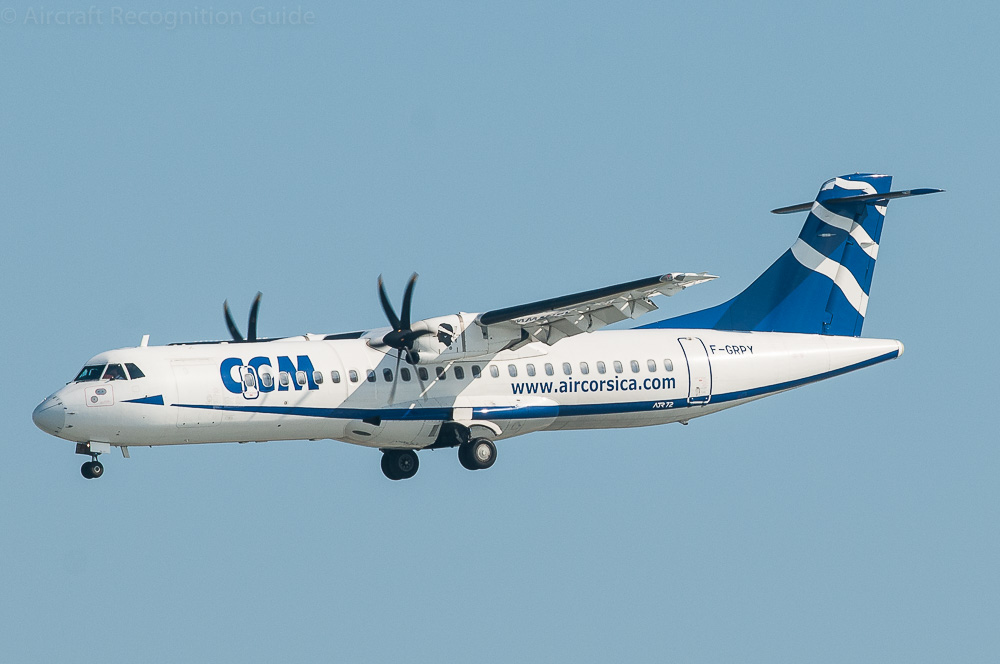 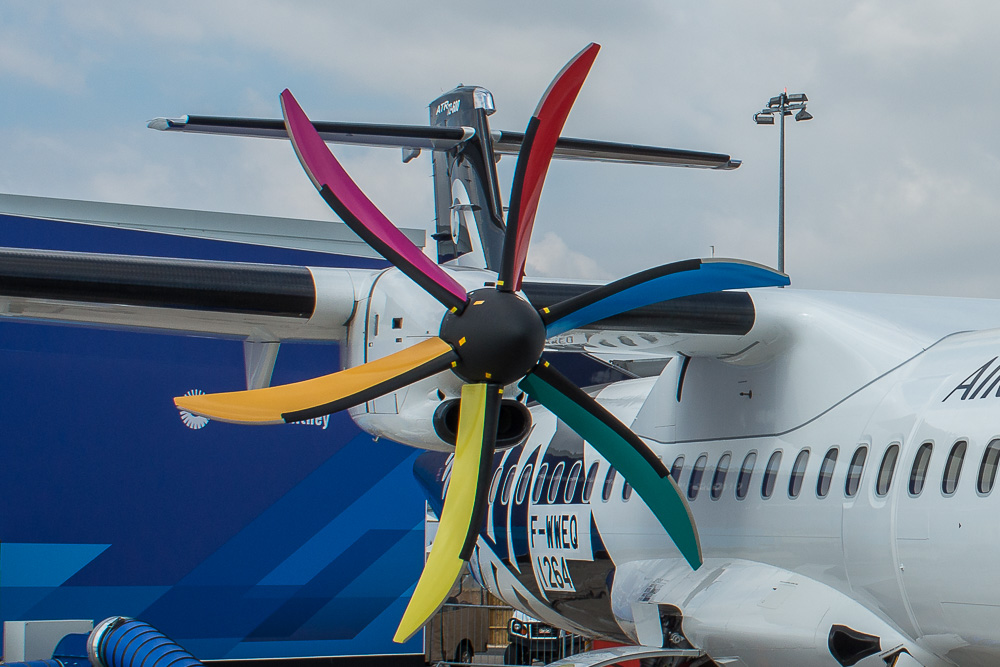 On this specific ATR72-600 the six curved propeller blades have many different colours.

This is a newly built cargo version of the ATR72-600. It has never had cabin windows, so no plugs are visible. Also the cargo door is wider than on the passenger ATR72-600, making it easy to distinguish it from possible future cargo conversions of the ATR72-500/600. 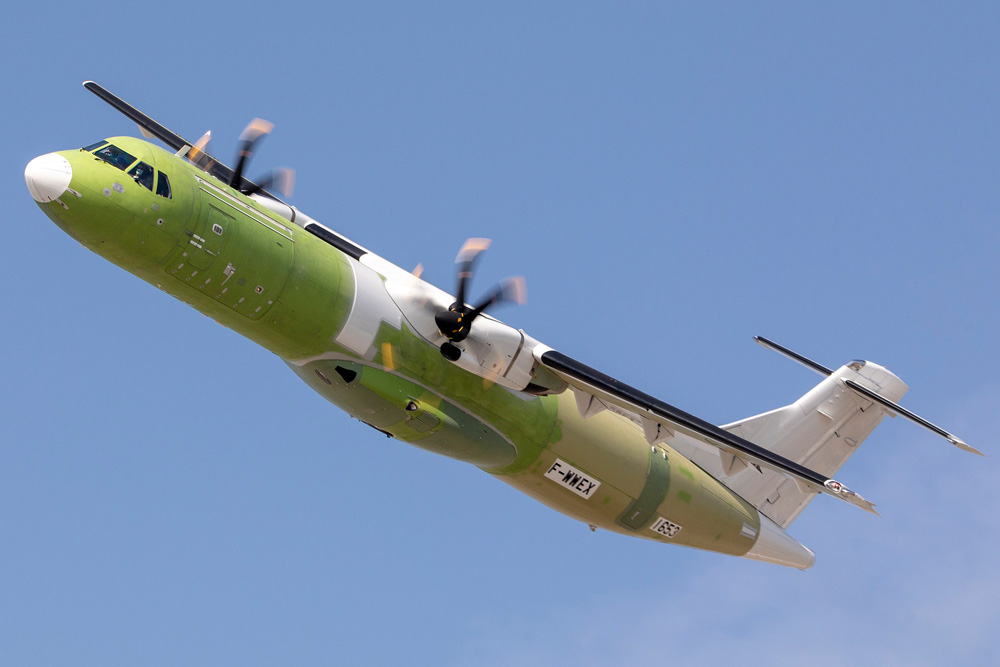 In primer paint you can clearly see the large cargo door and absence of cabin windows on the dedicated freighter version of the ATR72-600, the ATR72-600F. (photo ATR Aircraft/WikiMedia) 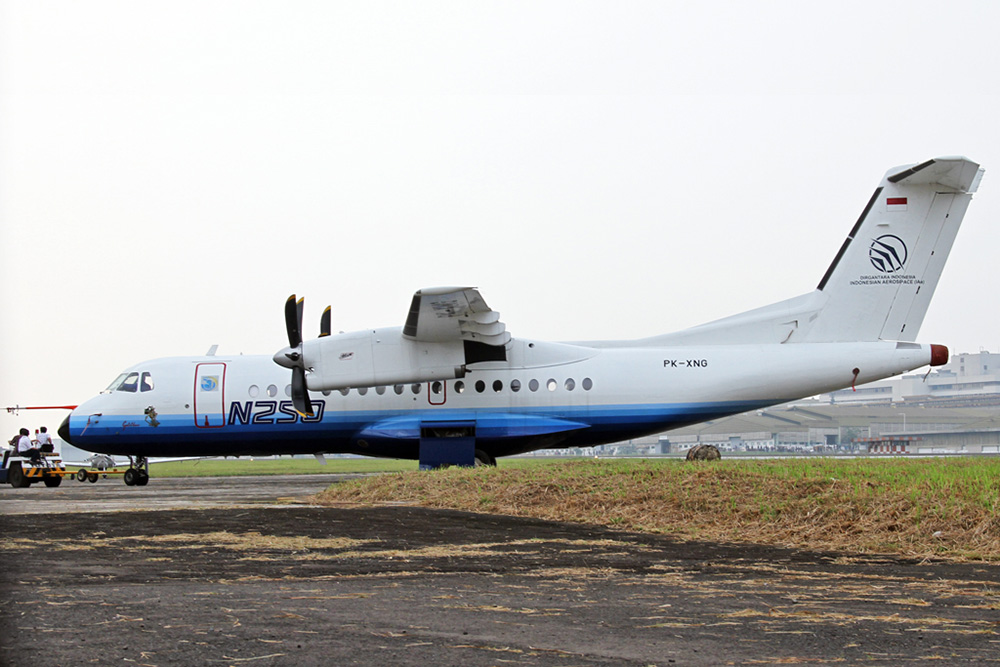 The aircraft that looks most like an ATR42 is the IPTN N250 pictured here. It has a similar short landing gear and cockpit windows, but has oval cabin windows. Also it has a normal dorsal fin instead of the two-step dorsal fin of the ATR. (photo WikiMedia/Eka viation) 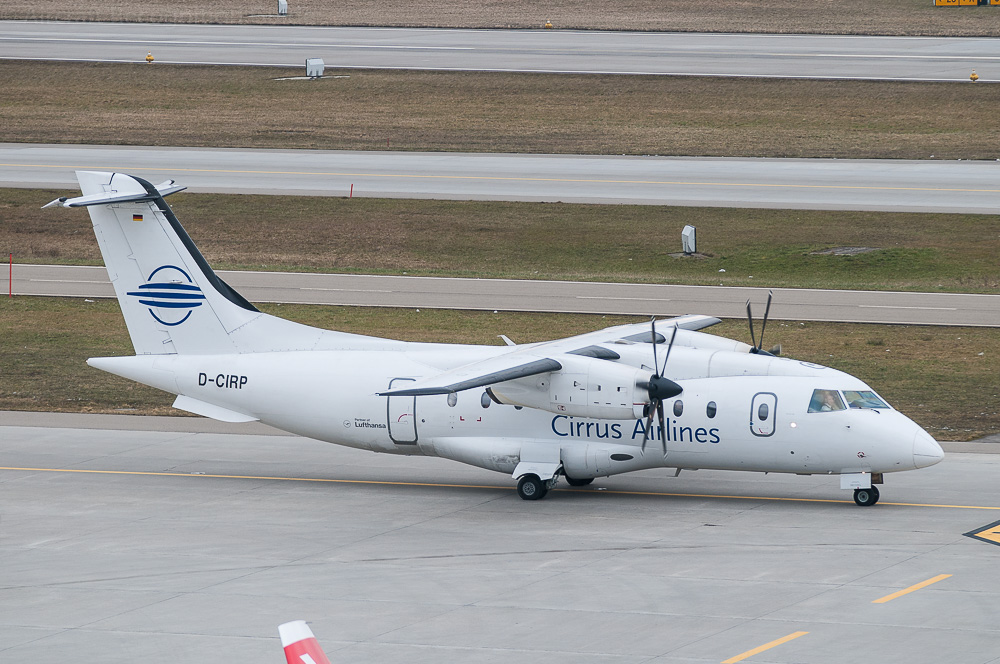 The smaller Dornier 328-100 has a similar tail cone (even more pointed) and short landing gear as the ATR42, but has oval cabin windows and four instead of six cockpit windows. Also note the streamline body on top of the fuselage. 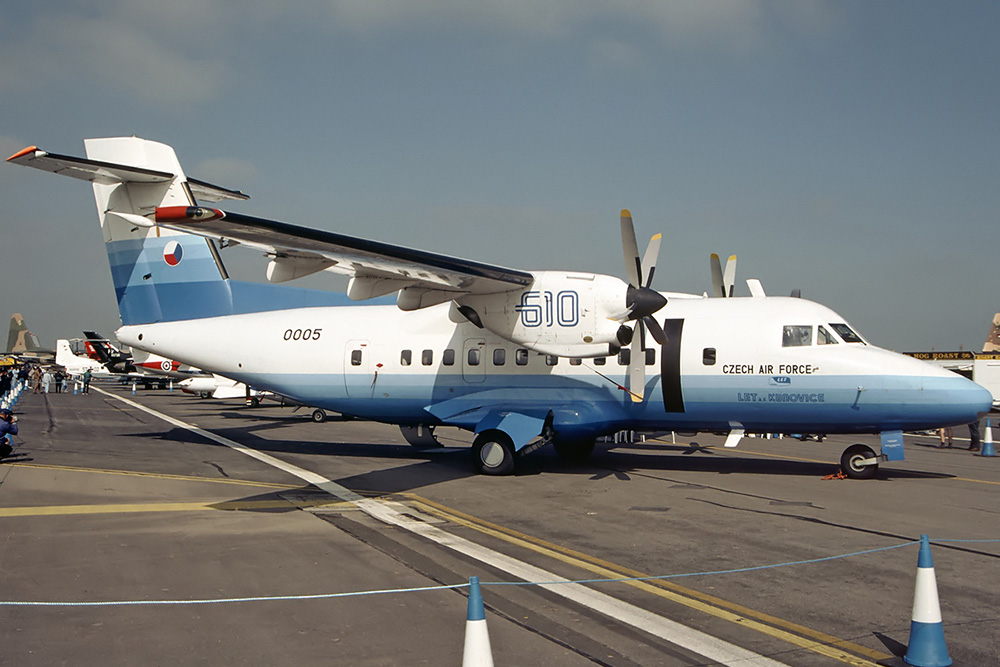 The L-610 can be regarded as a cross­over between a small ATR42 and the L‑410. Of the latter, the cockpit win­dows, more pointed nose and single nose wheel seem to be borrowed. The aircraft has a normal dorsal fin. (photo WikiMedia/Aldo Bidini) 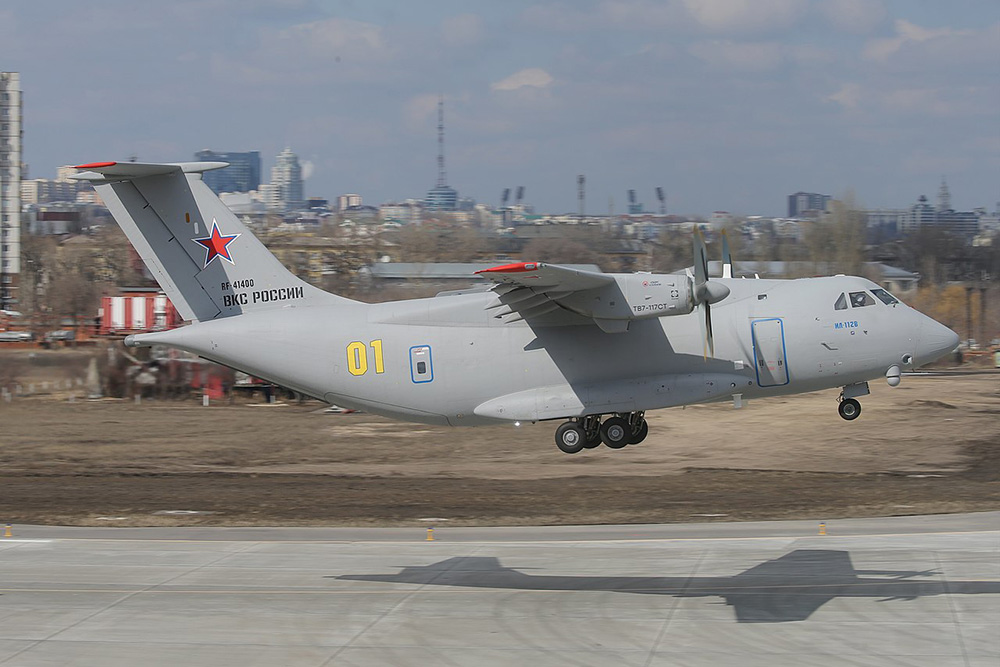 The Ilyushin Il-112 was designed from the start as a tactical military transport, but a commuter passenger versin is also planned. Thanks to its T-tail it looks like an ATR42 but then a bit "fatter". It has a swept up rear fuselage though and tandem wheel main landing gears as main difference. (photo: Marina Lystseva/WikiMedia) 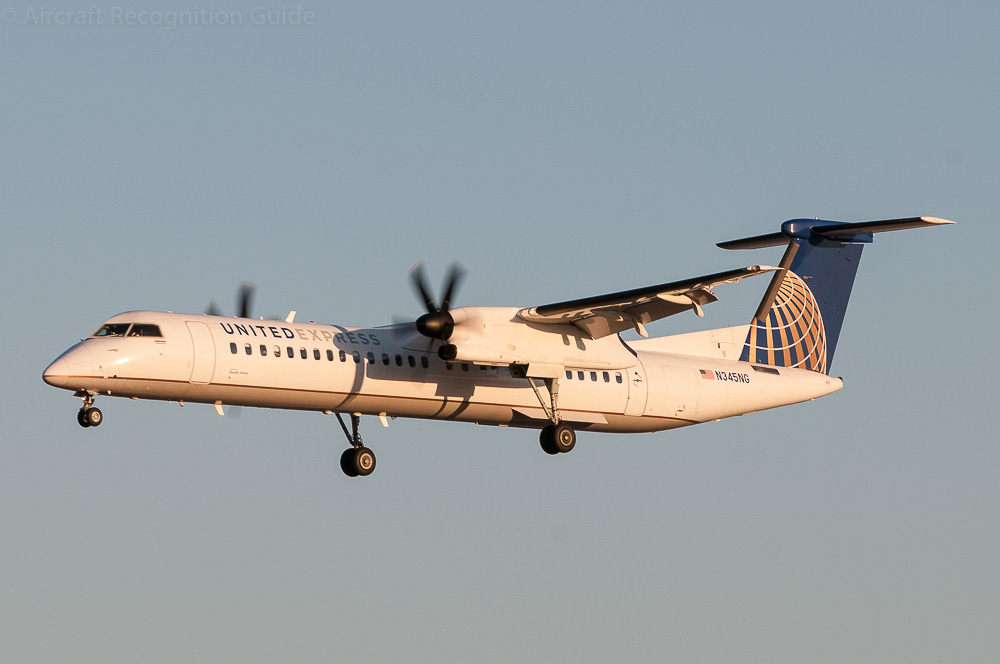 While being of the same size and basic configuration as the ATR, the Dash 8 series can be easily recognised by longer engine nacelles, in which the long main landing gear retracts. Also the Dash 8 has four cockpit windows.