Australian company Gippsland Aeronautics, later abbreviated to GippsAero, saw a market for a rugged small airplane in between the Cessna 206 and 208.  This Airvan was especially meant for the large 'outback' in Australia, and other areas in the world with a simple infrastructure. It has a square fuselage with big rounded rectangular cabin windows. The tail is nearly triangular and has a dent in the trailing edge of the vertical stabiliser. In front is a dorsal fin, and below the rear fuselage a small ventral fin. The Airvan has a fixed landing gear with all single wheels. 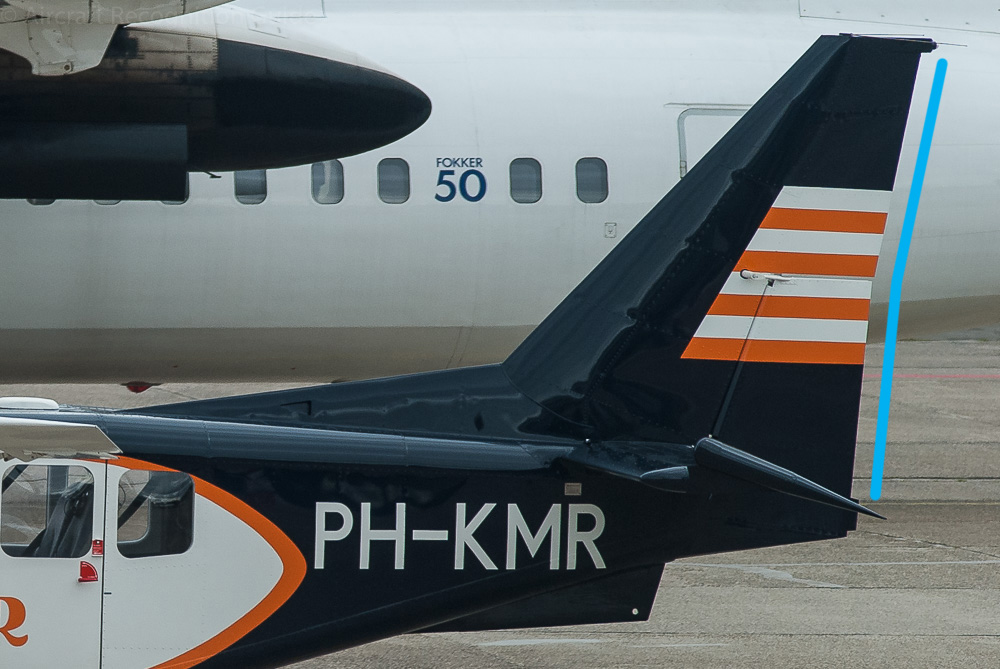 The vertical stabiliser of the Gippsland Arivan is one of the best recognition points: it is nearly triangular and has a small dent in the trailing edge.

The different versions of the Gippsland Airvan can be identified by

This is the original version. The standard GA8 has a piston engine driving a two-bladed prop. The aircraft was at first simply known as Airvan, but when Mahindra Group took over and introduced the Airvan 10, it was marketed as Mahindra Airvan 8. 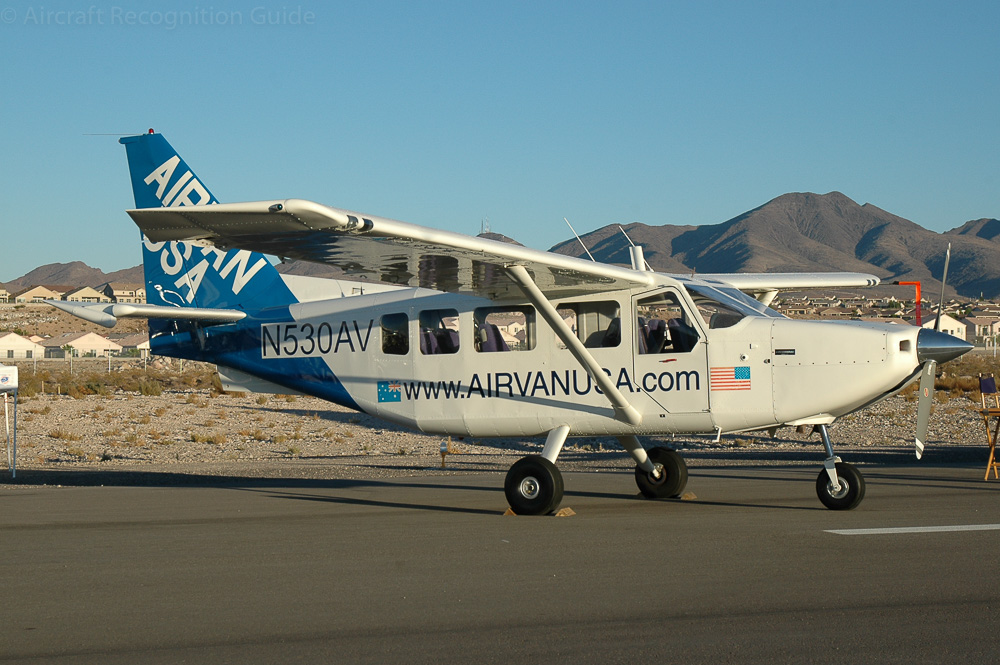 Here is a full view of the GA8 Airvan, the original variant. 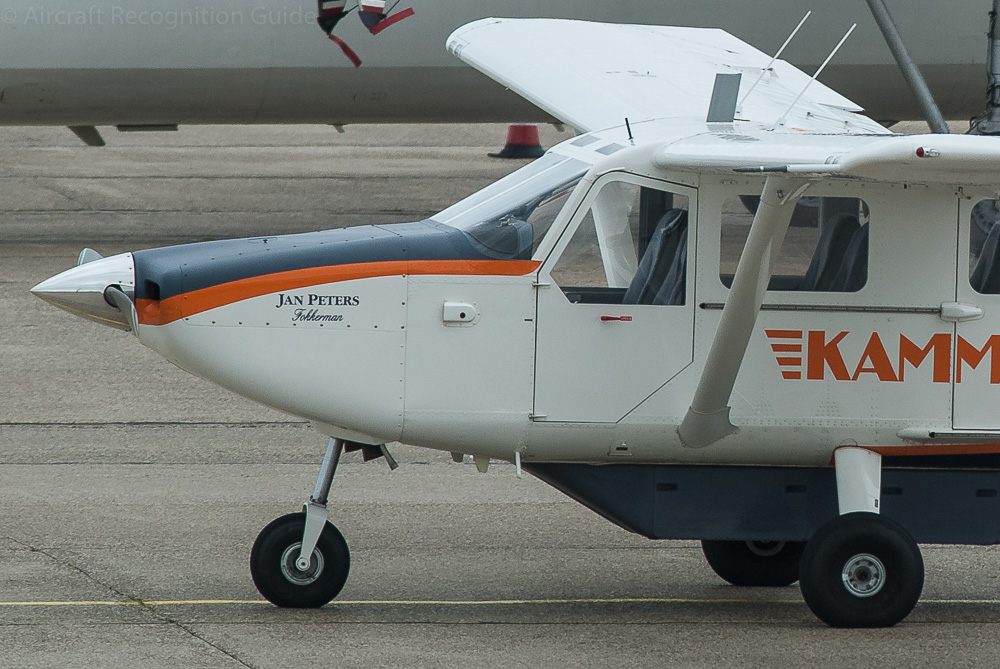 A detail of the streamlined nose shape of the GA8, showing the two-bladed propeller.

Similar in appearance to the GA8, but the turbocharged engine drives a three-bladed prop, which is thus the best way to recognise it. The nose is a bit less streamlined due to the air intake for thr turbo charger below the prop spinner. 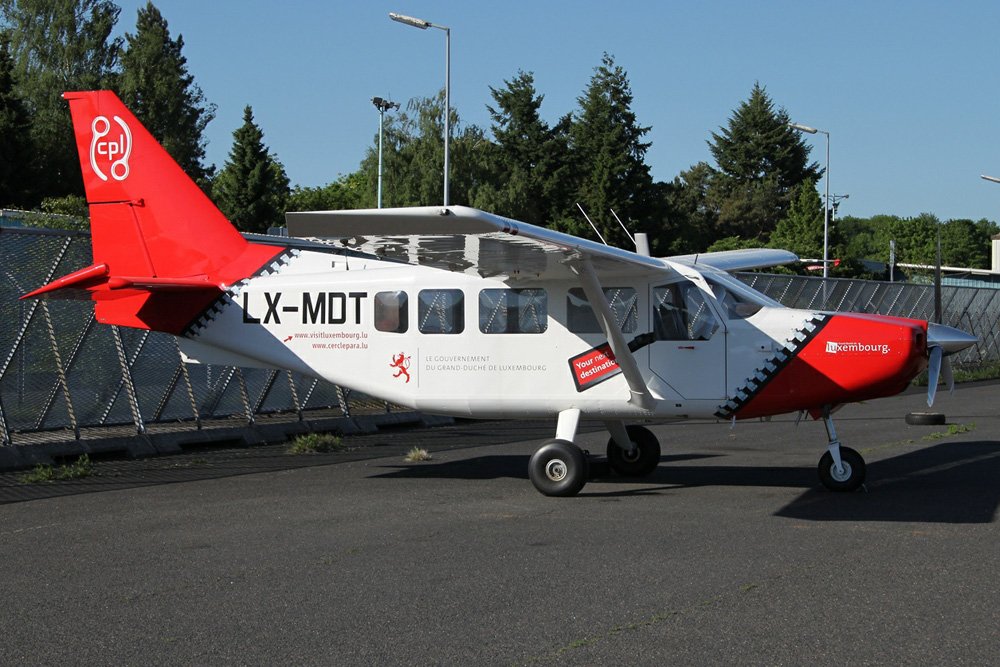 Thanks to the turbo charger the nose of the GA8-TC320 is slightly less streamlined than that of the standard GA8. (photo Peter Bakema/WikiMedia) 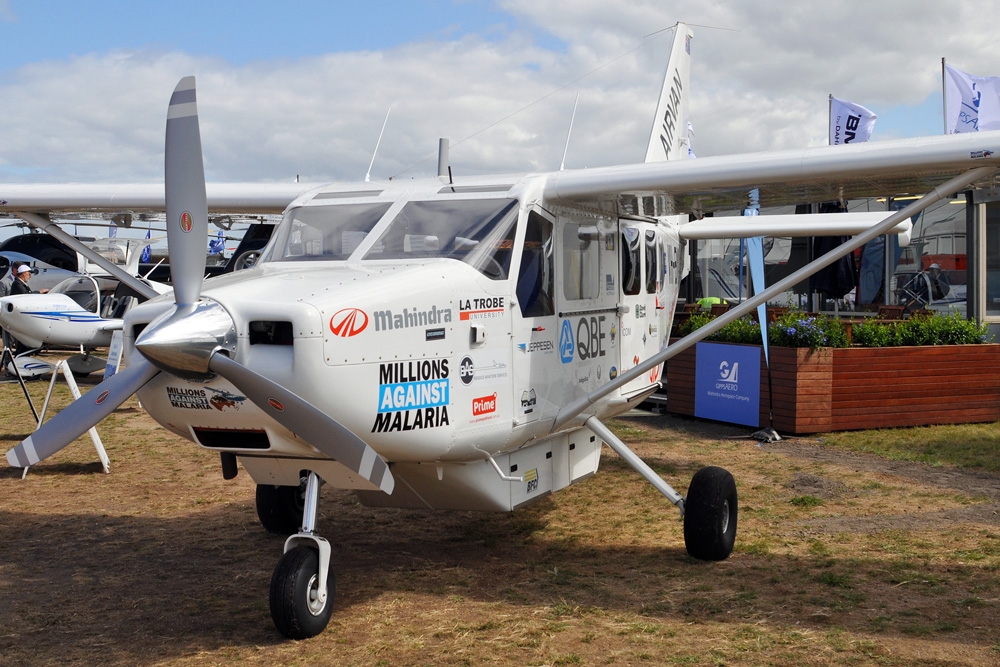 This front view better shows the three-bladed prop of the GA8-TC320, and the intake for the turbo charger, below the spinner. (photo Robert Frola/WikiMedia)

Stretched version of the GA8, with two extra cabin window on each side, six in total. The GA10 is powered by a single turboprop, with dual exhaust at the bottom of the nose. Due to the turbine engine, the engine nacelle is different from the GA8 and GA8-TC320. 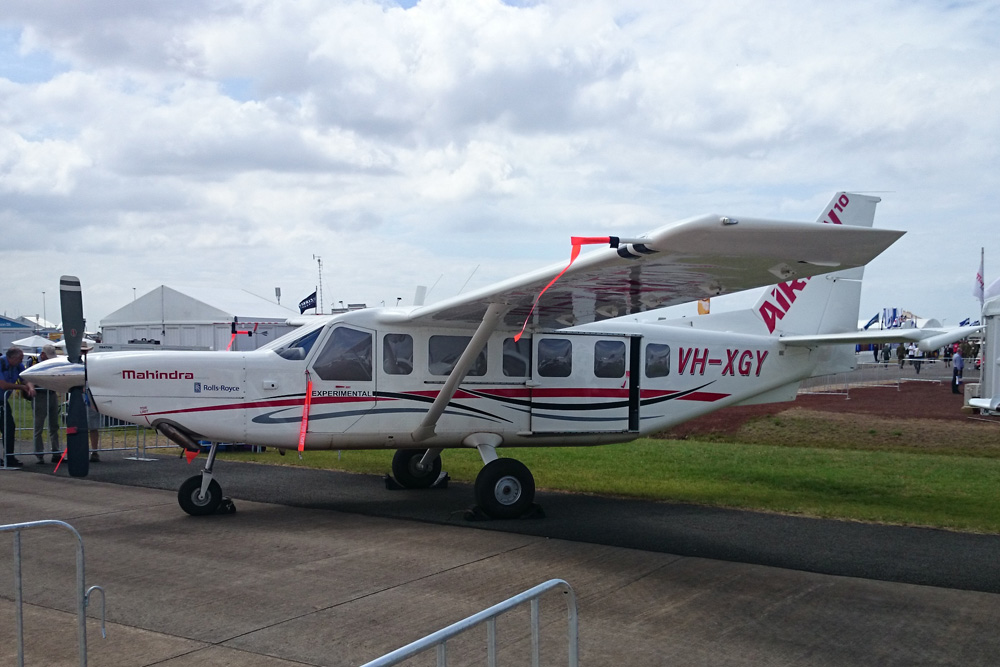 The GA10 is longer than the GA8, not only due to a longer nose with turboprop engine but also a longer cabin. (photo Bidgee/WikiMedia) 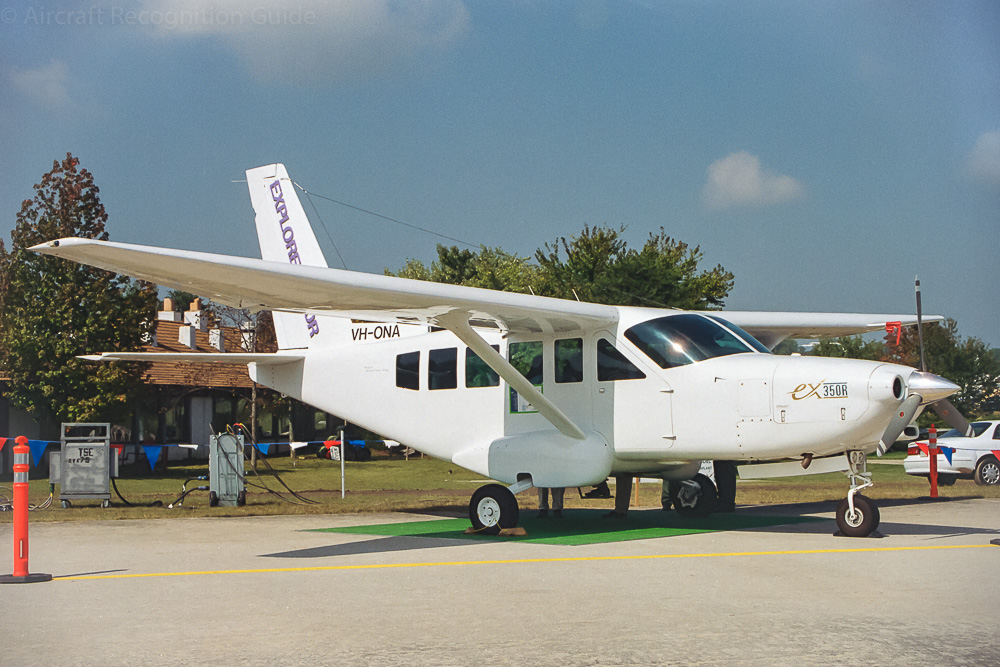 The Explorer 350T and 500T are about the same size as the Airvans, but have a retractable landing gear and associated streamline bodies at the wing strut attachment. Also the vertical stabiliser is taller and less of a triangle shape. 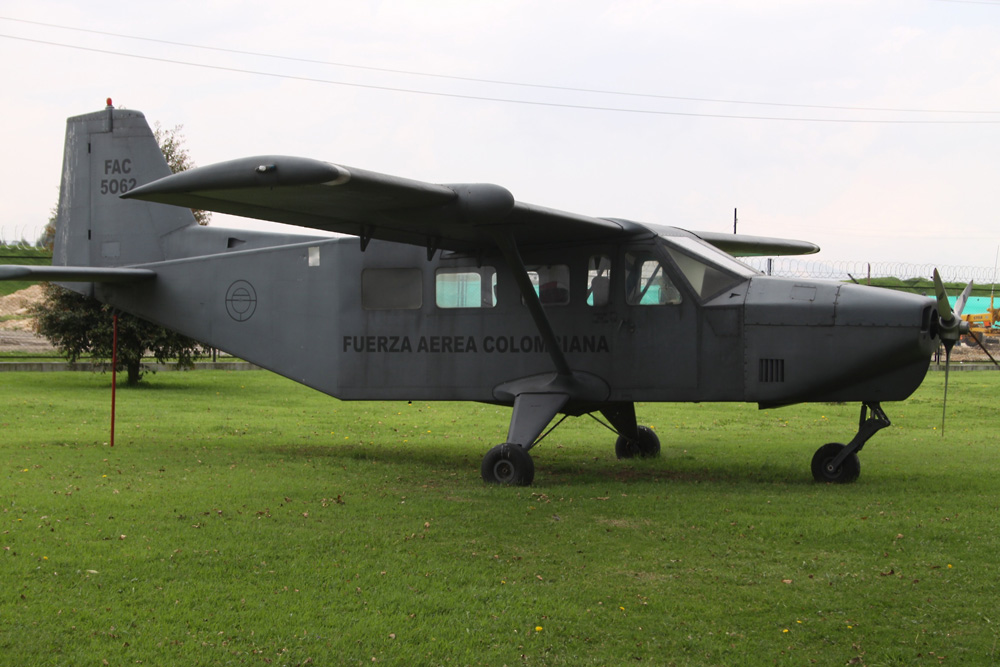 While the Airvan is not the most beautiful aircraft, the EL-1 or Gavilán 358M looks even worse. It has less rounded shapes than the Airvan and a trapezium shaped vertical stabiliser and main distinction points.

This long cabin version of the Cessna 172 could be confused with the Airvan, as it has the same basic shape. The Cessnas have a less tall, more curved vertical stabiliser without dent in the trailing edge. Also the top of the fuselage slopes down towards the tail. There is a sort of rear cabin window in frotnt of the dorsal fin. 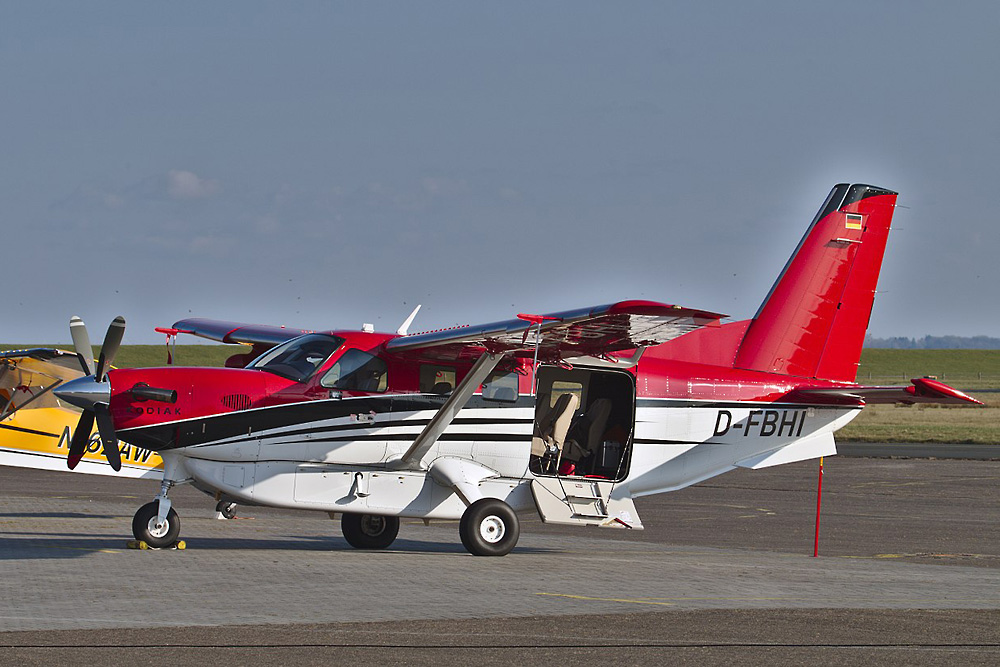 The Quest Kodiak looks more like a Cessna Caravan ibut could still be mixed up with especially the GA10. The Kodiak is a taller, rectangular vertical stabiliser. Also the two exhausts of the turboprop engine are on each side of the nose. 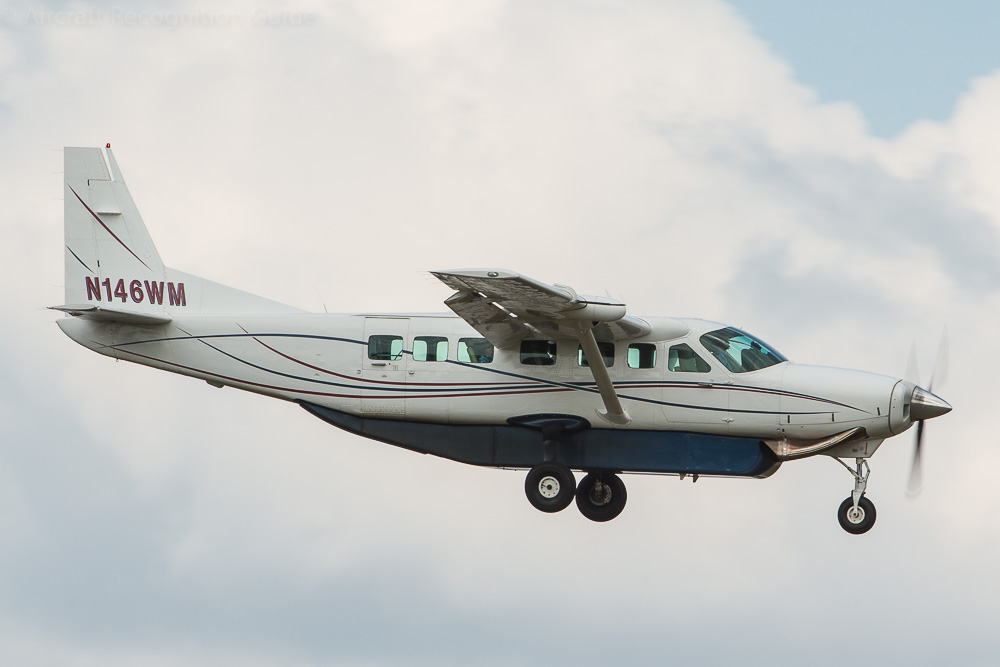 The difference between the Airvan and Cessna Caravan is mostly at the front and rear. The Caravan has a large, single exhaust on the right side and cockpit windows that are more curved. Finally, the vertical stabiliser is taller and has a more rectangular shape.